Eight years in to This Albertan Life, and we still had not made it to the famed Jasper National Park, despite the fact that it’s only a four hour drive from where we live. Which, for ultra-roadtrippers such as ourselves, is a crying shame.

Sometime in the late Fall/early Winter I resolved that Summer 2016 would be the year to address this gaping hole in our national park repertoire. A resolution that happened to coincide with a visit from my mother, a weak Canadian dollar, and a similar declaration from thousands of scenery-loving Americans and Europeans with stronger currencies.

By the time I pulled out my credit card, ready to make a reservation – in March (which, for someone like me, is astoundingly timely) – everything was booked. Reserved. Full. Complet.

Thus I did what any single-minded, stubborn individual would do, I cobbled together a compressed itinerary with whatever accommodation I could find for our party of six. My dreamed about four nights in Jasper, turned into one night in a trapper’s tent in nearby Kananaskis, one night in a small town motel an hour from Jasper, and one night in a tent-cabin in Jasper. And two nights in a random cottage outside Waterton National Park. Because three nights does not a summer vacation make. And also the professor was still smarting from his failed attempt to drive the Going to the Sun Road in May.

And that, ladies and gentlemen, is how you turn an 800km journey into a 2,100km journey.

We arrived in Kananaskis on a Tuesday late-morning and stopped at the information center. The park ranger had the latest in bear-related trail closures. Because Summer 2016 has also turned into ‘The Summer of the Bear.’ ‘We were thinking about hiking Pocaterra Ridge,’ I declared-asked. ‘That’s open,’ she nodded, with a cautionary ‘bears have been sighted on that trail. But you’re on a ridge so you’d [probably] see them since you’re out in the open. We do strongly recommend bear spray but we are completely sold out.’

Luckily I’d procured my first-ever can of bear spray a few days prior, carefully considering whether possibly scaring off a bear was worth $60. I decided, rather grudgingly, that it was. Probably.

Really, I decided that not listening to my mom or the Gort worry aloud about our lack of bear spray was worth $60. Definitely.

I’ve also declared Summer 2016 as ‘The Summer of Hiking.’ Mostly because we are home all summer with nothing planned other than my five nights of random fun. And also because the boys are 12, almost 9 and almost 7 and doesn’t that mean they’re practically old enough to hike the Appalachian Trail?

But hiking has not turned out to be the simple pursuit I expected. I say this based on our first hike of the summer to Chester Lake. I assumed you’d get a guidebook, select a trail, set foot on the trail, navigate the ensuing boy-child protestations and that would be that. But in my experience the trail finding instructions in the guidebook haven’t quite matched the scene in real-life, possibly due to everything being wiped out in the flood of 2013 or because the professor and I are incompetent trail interpreters. Maybe both.

The professor and I walked in a circle looking for said dirt trail. We found one….that led to a picnic table. We found one that didn’t appear to be a bonafide trail. And nothing else. So we started walking in the opposite direction on a gravel road with caution/do not cross tape across it along with some sort of bear related warning. Our oldest, rule-abiding boy-child expressed his dissension, loudly and repeatedly, while the professor insisted ‘mom checked at the information center and we were told this trail was fine’. All while I silently replayed the park ranger’s ‘bears have been sighted on the trail’ along with the fact that I was 99% sure we were on the wrong trail.

We walked and walked, without finding ‘the unmaintained trail on the left’, hoping the Gort wouldn’t see the big deposit of berry-laden bear scat and making as much noise as possible. Finally, one hour – maybe two – later I said to the professor ‘I’m pretty sure we are on the wrong trail, let’s just turn around.’

Another key component of hiking – one that I have yet to implement, though I see the value in it – is time, or, more specifically, keeping track of it. What time you start the hike, how long you’ve been hiking, how long you might expect to hike, that sort of thing. By the end of the summer I might wear a watch, or at least make a point of looking at the time on my phone instead of snapping photos obliviously.

On our way back to the car, I noticed a trail off in the distance, one that better matched the description and direction of the Pocaterra Ridge hike. Once we’d reached the van, I summoned the bear spray-carrying professor and we headed off in search of the missing trail. Sure enough, it was ‘the dirt trail that didn’t really look like a bonafide dirt trail.’

On the way to our campsite, we spotted this bear on the side of the road. From the safe confines of our car. The orange tag in its ear and collar around its neck gave the experience a bit of an ‘outdoor zoo’ rather than ‘wild bear in nature’ vibe.  But the professor, who loves nothing more than spotting animals while driving, was semi-satisfied. Even more so when we spotted a second, collar-less bear five minutes later. 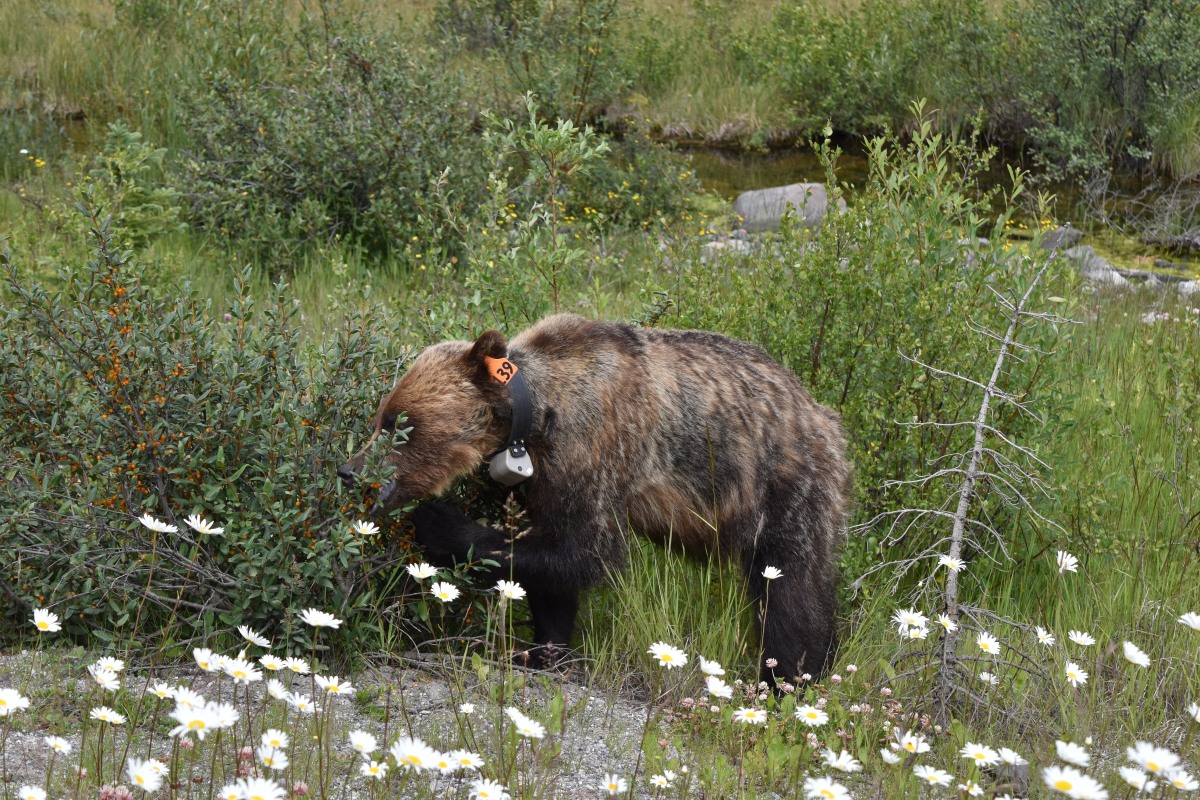 We had not dabbled in camping-related activities since Summer 2014, also known as ‘The Summer we spent Two Nights in a Tent-Trailer.’ This was partly due to the fact that we spent Summer 2015 driving our brains out, but mostly because we were all still suffering from camping-related PTSD as a result of that abbreviated experience. So much so that when it came time to pack for this trip, I gathered wool blankets and sheets and fleece pajamas in addition to our sleeping bags because I can still remember how cold I’d been on those two August nights.

People often talk about camping and how relaxing it is and we’ll just have to agree to disagree on that one. For in my experience it’s basically nonstop work – the planning, the purchasing, packing everything you might possibly need, food preparation, loading, driving, unloading, setting up, making a fire, cooking food, arguing with kids about fire, the ordeal of going to the bathroom, bear prevention (aka continuous cleanup), 3 or 4 hours of intermittent sleep in between wondering what time it is, hoping no one has to go to the bathroom, and how much longer before you can get up, making a fire, cobbling together an unsatisfactory breakfast, drinking bad coffee, cleaning up, packing up, loading and getting back in the car.

But I suppose if you’re going to do it, staying in a trapper’s tent is the lesser of all camping evils – equipped with bed-like structures, and freeing you from tent set-up duties. Leaving you with a spare 10 minutes to play Anomia with your kids and argue about rules and sportsmanship.