A couple of weekends ago, just before the calendar was due to flip to December, we made the somewhat unorthodox decision to forego our annual Christmas tree hunt and settle for a pre-cut tree from IKEA.

If memory serves this decision was made in part because I was strangely fixated on having a tree in our house before the official start of advent. And on that ‘last-weekend-before-advent’ there simply wasn’t time to rush out to the woods and cut down a tree to accommodate this. It may have also been insanely cold. Or maybe it wasn’t. Who can recall?

So we drove to IKEA, stood in a ‘Christmas tree’ line and forked over $20, then drove around to the tree-lot where the professor jumped out with two of his boy-children to pick out a tree. Percy and I stayed in the car…..because five people standing on a pavement arguing about a tree is just all kinds of ridiculous.

Within five minutes they’d found a tree, loaded it into the van and we were on our way. It may not have been particularly memorable or photogenic, but it was efficient. Plus we had time to stop at Costco. Win-win.

The professor dragged the tree through the house down to the basement, where we’d decided to set it up. Fearing he’d never be able to find his way back, he made a trail with copious amounts of pine needles to ensure a safe return, a la Hansel and Gretel. This is, of course, hyperbole. The IKEA tree dropped copious amounts of needles and had me cursing its existence five minutes after it entered my home.

‘THIS is why people hate real trees,’ I huffed as I dug out the broom and dustpan and tried to erase the tree’s tracks, and again later when I pushed the vacuum over the nubby basement carpet for more of the same.

We watched Elf while the professor wrapped lights around the tree and the boys slapped some ornaments upon its branches.

But the upstairs felt bare without even a trace of an evergreen branch and the professor had whimpered on more than one occasion about ‘the tree we picked up in a lot’ and even the boys complained about how we hadn’t gone to the forest to cut down a tree.

Thus, two weekends later, we found ourselves ensconced in the unfashionable minivan, heading to Kananaskis in search of a mini-tree for the living room. I doled out hot apple cider, and crackers with peanut butter and apples, and the professor brought along his ipod so we could listen to the likes of Jewel and Mariah Carey being festive. The Hen sang what words he knew while the Gort read a book and it was all fairly idyllic (if you erase the part about the 10.5 year old boy who had voiced his considerable displeasure upon hearing about the excursion, and the wife who’d spent the morning being annoyed about a dirty juicer and a cell phone bill.)

The snow we’d gotten a few weeks ago in Calgary had mostly melted thanks to the warmer-than-normal temperatures, but by the time we turned off the highway at the Sibbald Creek exit – right around the time it occurred to me that I never dress appropriately for tree-cutting – we found ourselves in a wintry Narnia of sorts, with grey skies and frosty white trees. 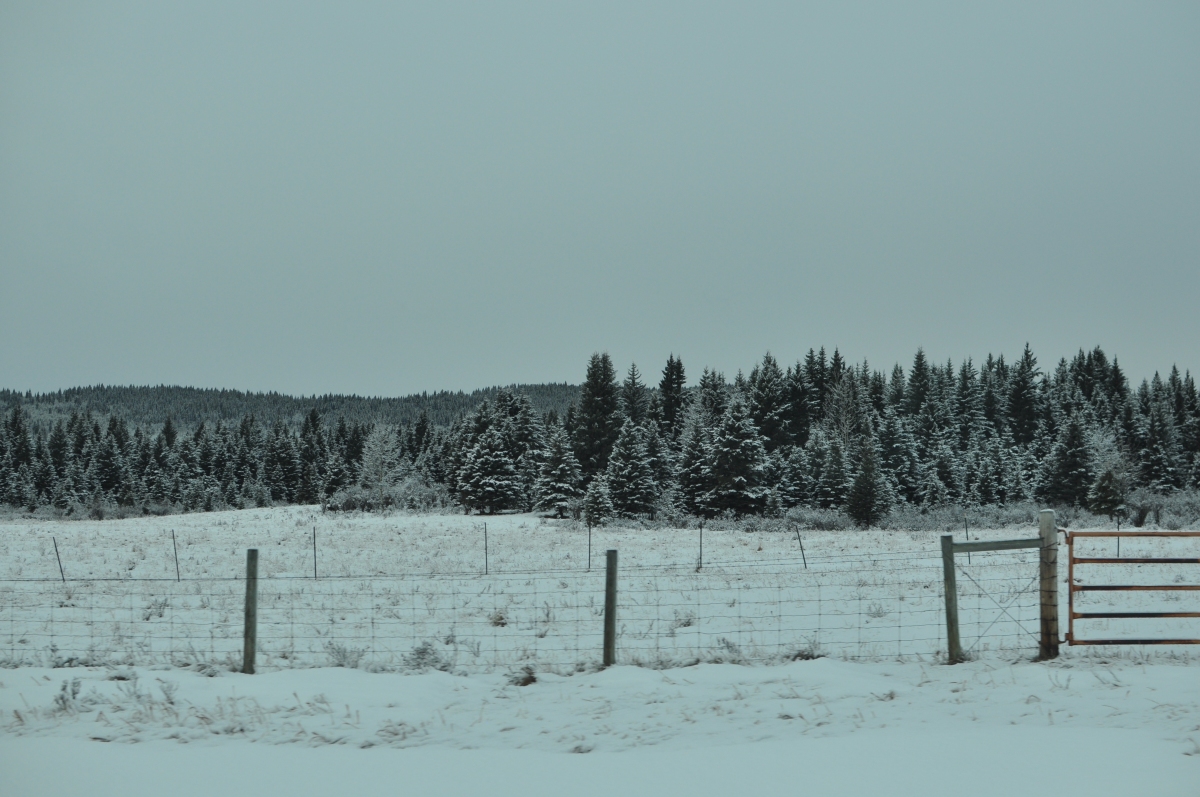 And thirty minutes after that, we found ourselves in Lapland. 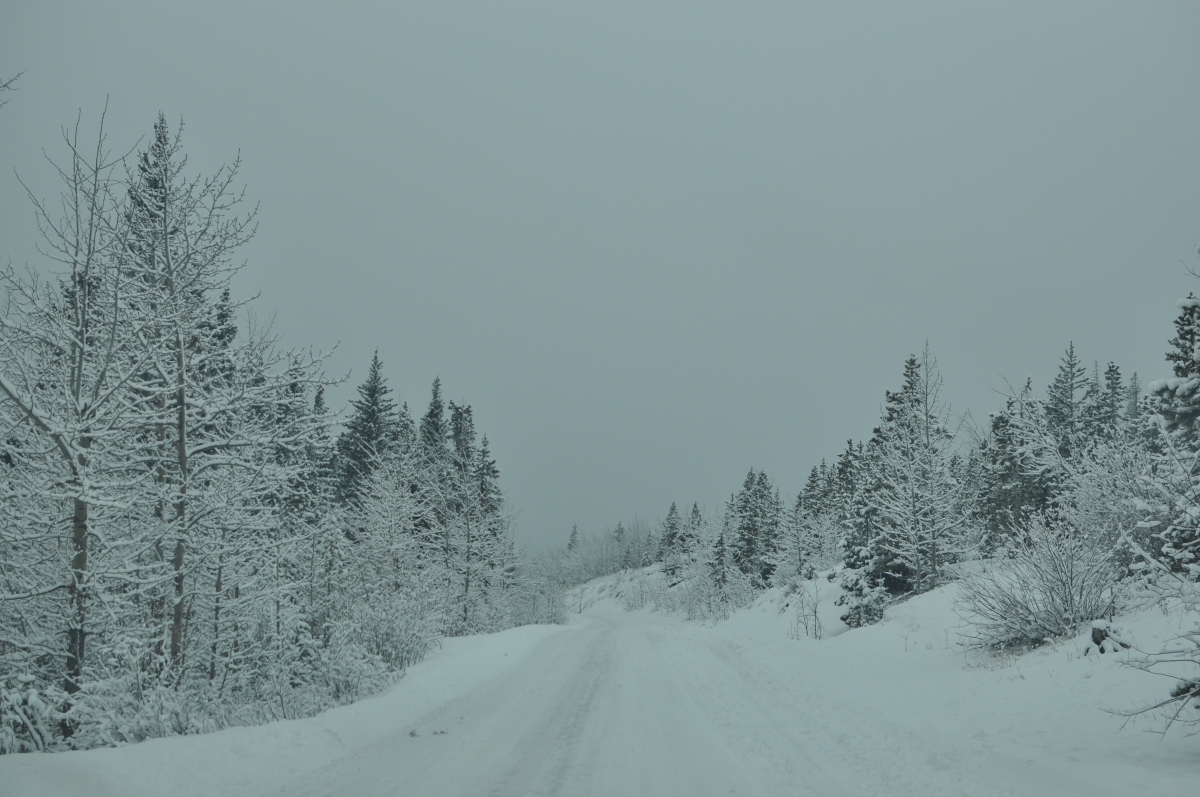 Whoops. We forged ahead, the professor steeling himself for the spot on the hill where the same unfashionable minivan had gotten stuck the previous year, where his wife had nearly lost the plot when the van threatened to slide backwards into the cars waiting behind us.

‘Whatever you do, don’t stop,’ I warned and we breathed a collective sigh of relief as the van made it up the hill without incidence and turned into the parking lot. We paid for our tree-cutting permit and, with saws in hand, set off in search of a mini-tree, while I traipsed through snow in my ankleboots. All while Percy, aka Paul Bunyan, stopped at every short-ish tree he encountered and tried to saw it off.

Fortunately he applies virtually no pressure with a saw, and it would take him at least thirty years to sever anything.

We found a tree and cut it down. As we made our way back to the car, I marveled – silently – at the absence of tears and complaints, and the fact that our oldest son was dragging the tree back and the professor and I were following behind our boy-children, instead of one adult leading the pack while the other lagged behind picking up the emotionally depleted pieces.

It was a Christmas miracle. Of sorts.

Once the tree was shoved into the van, I bought the ‘starving’ boys hot dogs, which they inhaled by the fire. An adorable Wheaten Terrier pup named Snickers was playing nearby and we chatted with its owner. ‘I hear it’s pretty bad out,’ she mentioned when we told her we were heading back. ‘A lot of people are getting stuck. Whatever you do….don’t stop!’ she cautioned as we parted ways.

Back in the car, the professor steered the van out of the parking lot for our return to Calgary. Just past the first corner, a car was stuck in the middle of same hill we’d traversed an hour earlier. We continued on, optimistic that we had somehow dodged a roadside bullet. At the intersection near Highway 68, the professor rolled through the stop sign so as to avoid the fate of the [stuck] Scion we’d seen on our way in. Another roadside bullet dodged.

And then, roughly two minutes later, we were plum out of luck.

Hill. Ice. Van.Sliding backwards. On the wrong side of the road. Woman having complete meltdown in passenger seat.

I may have , , one or two strengths, but remaining calm in a car that is not doing what it is supposed to be doing while the professor is at the steering wheel is not one of them. Chances are, if you’re driving a car and I happen to be sitting inside it during such a moment, I will likely gnaw the insides of my cheeks, or clench my fists into sweaty oblivion, without saying much. Unfortunately I can’t seem to do the same when my better half is at the wheel.

At some point during what I was certain was our imminent demise, we found ourselves in a pile of snow on the left side of the road, watching helplessly, silently, while cars drove semi-carefully around us. Hoping not to be struck by said cars.

An older, black Ford Explorer stopped; the driver motioning for us to roll down our window. ‘You want me to pull you up with my truck,’ he shouted. At which I fully expected the professor to say ‘no, that’s okay,’ with some sort of hand motion to indicate we were mere seconds away from finding a way out of our predicament. (Even though, of course, we weren’t.) So I was thoroughly surprised when instead I heard him say, ‘actually yes, that would be great.’

With the kind stranger’s wheels spinning madly, and the professor doing whatever it is one is supposed to do when possibly being tethered up a hill, I held my head in my hands and hoped the end result would not be two vehicles collided in a heap at the bottom of the hill.

Eventually we made it to a point on the hill where it seemed reasonable for our unfashionable minivan to continue driving without assistance. We stopped, and the good samaritan untethered our vehicle. ‘Can I get your address,’ I asked awkwardly, ‘we’d like to send you something.’

He rattled off his Calgary address. ‘And your name? Last name?’ I asked, leery of sending a nameless envelope out into the world, but not wanting to sound like a creepy stalker-type, either.

‘Pompana,’ he yelled back, before getting in his truck and waiting for our spinning wheels to gain traction.

We drove back in quiet gratitude, unable to exhale until our tires hit asphalt.