It’s probably the parental equivalent of saying ‘I don’t like baby seals,’ but in keeping with my habit of having all manner of commonsensical revelations this year, I have concluded once and for all that ‘I don’t like Halloween.’

How do I hate thee? Let me count the ways.

Thy polyester, insanely overpriced costumes. Thy tacky decor involving plastic orange pumpkins and artificial cobwebs. Thy propensity of occurring on a night when the weather is less than stellar; forcing me to walk around darkened neighborhoods with children who are alternately hellbent on getting.their.candy while complaining loudly about how they are cold and tired and want to go home. Thy boxes of mini-chocolates that fall into my mouth.

The only Halloween I can foresee enjoying is the one in which my three boy-children are dressed as Alvin and the Chipmunks and we walk the streets of Calgary while the professor (aka Dave Seville) yells ‘Allllllllllvinn!’

And, since my boys have let me know in no uncertain terms that that particular scenario will never, ever happen, we might as well just skip Halloween forevermore.

Last year, my approach to old Hallows’ eve consisted of asking the boys (two days before the big event) what they wanted to be and scrambling to fulfill their costume dreams.

This year I decided to take a more conventional approach. I asked them what they wanted to be (Yoda, Star Wars somethingorother and military man) and on October 18 – which, according to my calculations is nearly 14 days before Halloween – I drove the boys to a place that resembles an Adult Bookstore but only sells Halloween merchandise.

I squeezed my older-than-old minivan into a spot designed for a Honda civic – the only spot left in the lot, which is always a good sign – and the boys and I headed into the store. Think: store crammed with tacky merchandise, bursting at the seams with people.

I rifled through costumes while trying to keep the boys out of the way of my fellow shoppers. I found Yoda, but could not determine if it was Percy’s size and I could not bear the thought of paying $45 for the privilege of buying a ‘final-sale’ too-big (or small) costume.

‘How about Darth Vader,’ I tried to change his mind. He acquiesced. The Hen settled on being a ‘Clone Trooper’ and my would-be military man left emptyhanded.

We squeezed back into the minivan and Percy tore open the packaging of his ‘Dark Vader’ costume. The light saber was broken.

The next day – after checking at Target and Value Village and possibly another place I’ve erased from my memory – the Gort and I drove to an army surplus store. Where the salesperson sold me a pair of too-big pants and an authentic-looking water canteen. (She also tried to sell the Gort a size small, women’s camouflage t-shirt. Non, merci.)

Fast forward twelve days to October 31st, mere hours before the filling of the bags would commence. The boys had costumes, but I had neither candy for trick or treaters, nor jack o’lanterns for my home. Despite the fact that I’d walked past the bins-upon-bins of $3 orange pumpkins at the Superstore at least 500 times, I had not been able to bring myself to load a few in my cart and purchase them.

Thus I found myself at 3pm on Halloween standing at the Superstore staring at the last pumpkin bin full of mushy, rotten uncarveable gourds.

For the previous two Halloweens, the professor had taken the boys trick or treating while I stayed home to hand out candy (and to take Percy ‘back’ after he’d been to five houses and declared himself too tired to continue.) But this year, the professor had to work which meant I was in charge of the whole shebang. As the day went on, I found myself saying awesome things like ‘what if we just skip Halloween this year? I will buy each of you candy and we can get a movie and snacks and have a party.’

‘How much candy?’ ‘Well, more than I usually buy you, but not as much as you would get trick or treating.’

The youngest two were close to accepting my deal but suddenly I felt like a terrible parent. The weather was actually decent (for Calgary)! And surely my three boys won’t be trick or treating with me much longer. In an effort to cope with my reality, I dove headfirst into mini-candy land; falling off my no-candy wagon in spectacular fashion. Three hits of refined palm kernel oil and soy lecithin, and all bets were off. ‘In line for 97 cent gas at Costco,’ I texted the professor. ‘Just inhaled 3 mini kit kats. This can’t end well.’

‘Stop eating the candy!’ the boys panicked, certain there would be nothing left for the (5) trick or treaters that stop at our house. 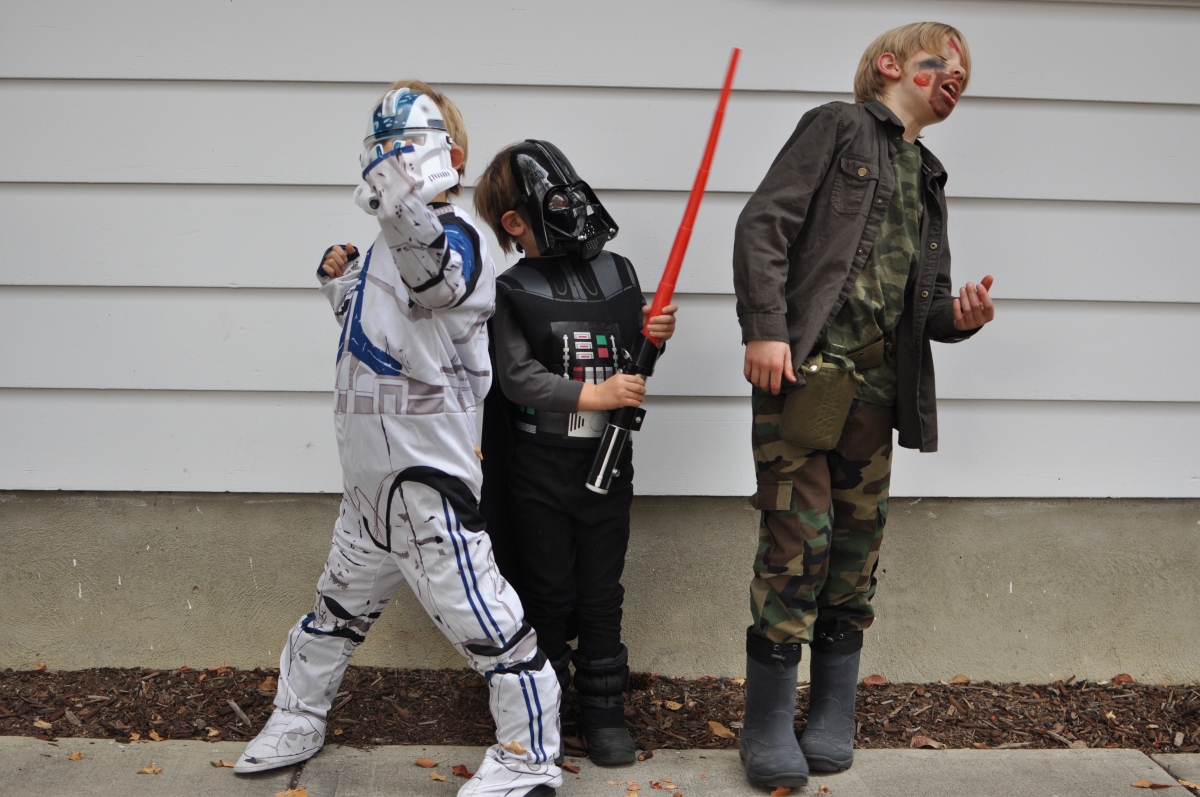 Shortly after 6pm, having stood at the window watching for signs of life in our crescent, the boys ran out the door carrying reusable shopping bags. ‘I want to fill it,’ the Gort declared ambitiously.

Forty-five minutes later we were home; bags of candy strewn over the bedroom floor as the sorting began in earnest. ‘Taxes’ were handed over to the trick or treating supervisor, candy was consumed, trades were made and warnings issued.

‘Everyone on full alert,’ the Gort urged his brothers to guard vigilantly against candy thieves of the maternal kind. Even though I’m pretty much unstoppable when it comes to snuffing out their hiding places.

‘Hey mom,’ the Gort asked me a couple of days later (after several not-entirely-secret missions to avail myself to their reese’s and m&m’s) ‘do you know the story of Zacchaeus?” [That tax collector from the Bible who was chastened for skimming a little off the top.] ‘Yeah,’ I assured him. ‘Does that mean you’re going to give me back four times the candy that you stole from me?’

One thought on “Halloween: The Last Frontier”