When it comes to childentertaining, I prefer to avoid anything that involves people or standing, for long periods of time. Which basically means I tend to avoid, as much as possible, playgrounds, museums, amusement parks – basically anything that little people (supposedly) think is fun. At least, according to the marketing mavens out there.

Generally, I am only vaguely bothered by my slackerness. I observe other moms heading to the playground after school, while I walk home with my boys and suppress the slight twinge of guilt by noting the less-than-ideal temperature, or conjuring a memory of how dull it is to stand on a bed of gravel whilst squinting to make sure the people you love the most aren’t falling from the monkey bars or darting in front of the occupied swings.

Isn’t it enough, I tell myself, that I don’t do drugs, that I (mostly) provide my peeps with clean clothes and don’t serve them canned spaghetti for each of their seven daily meals?

This set-the-bar-low approach to child development works a treat most days, but then, once in a blue moon, an ad will pop up on Facebook about a must-see ‘Lego Fest’ and you can’t help but think that your three boys who own a metric ton of the plastic bricks, would love nothing better than to roam around a convention centre filled with Lego.

Even if it goes against your better judgment and your aversion to both crowds and standing on your feet for hours on end.

So you fork over some cash and find yourself sitting on the CTrain on a Friday afternoon, heading into downtown. Having just fed your family pizza slices in the car so as to avoid the lines and prices and dodgy food that are part and parcel of large event concessions.

While the boys are fully immersed in the train ride experience, the professor picks up a copy of the metro news. He reads the article about increased bear activity and proceeds to tell me about it.

‘I’m imagining being mauled by a bear right now,’ I process the information. Which is an interesting reflective experience. (Try it!)

‘I’d rather be mauled by a bear than go to this event,’ the professor grumbles. Because he is even less enamored with crowds and standing than I am.

‘Well, getting mauled by a bear would definitely be shorter,’ I conceded.

And with that sense of perspective we descended upon the BMO Centre, along with a lot of other people, to explore 3 acres of allthingsLego for the next four hours.

Because, though I disdain the crowds and the standing, I also have strange ideas around getting ‘my money’s worth.’ And in this case it meant staying for all 4 hours of the event.

We began the great meander. We stopped at the monochrome build station, building things with lime-green Lego pieces while the professor and Percy hung out in the Duplo pit. Because, with a 5.5 year age span from oldest to youngest, they will not be ‘on the same page’ – socially or intellectually – until Percy turns 25.

We shuffled, stared at elaborate Lego sculptures (the Hulk, McQueen, a wall of Ninja Turtles, etc.), we collected pamphlets and posters and Lego magazines, we played with Lego Mindstorms EV3 for the allotted 2 minutes before being asked to move on.

I saw a family we knew from basketball – a mom, dad, their three boys and two grandparents.’No way am I going to be the kind of grandparent who goes to Lego Fest,’ I promised myself, ‘I’ll be the grandparent who says ‘have fun! Here’s some money, buy yourself a souvenir.’ 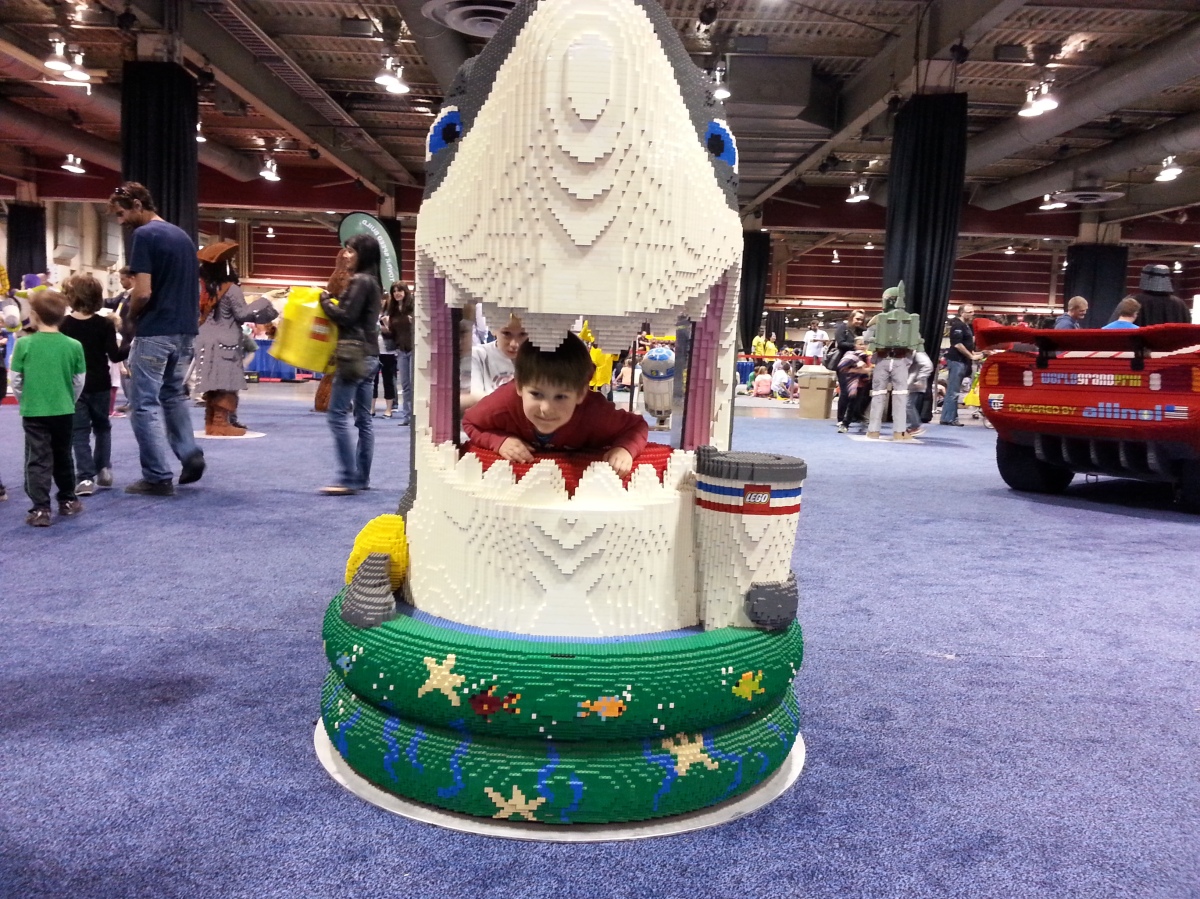 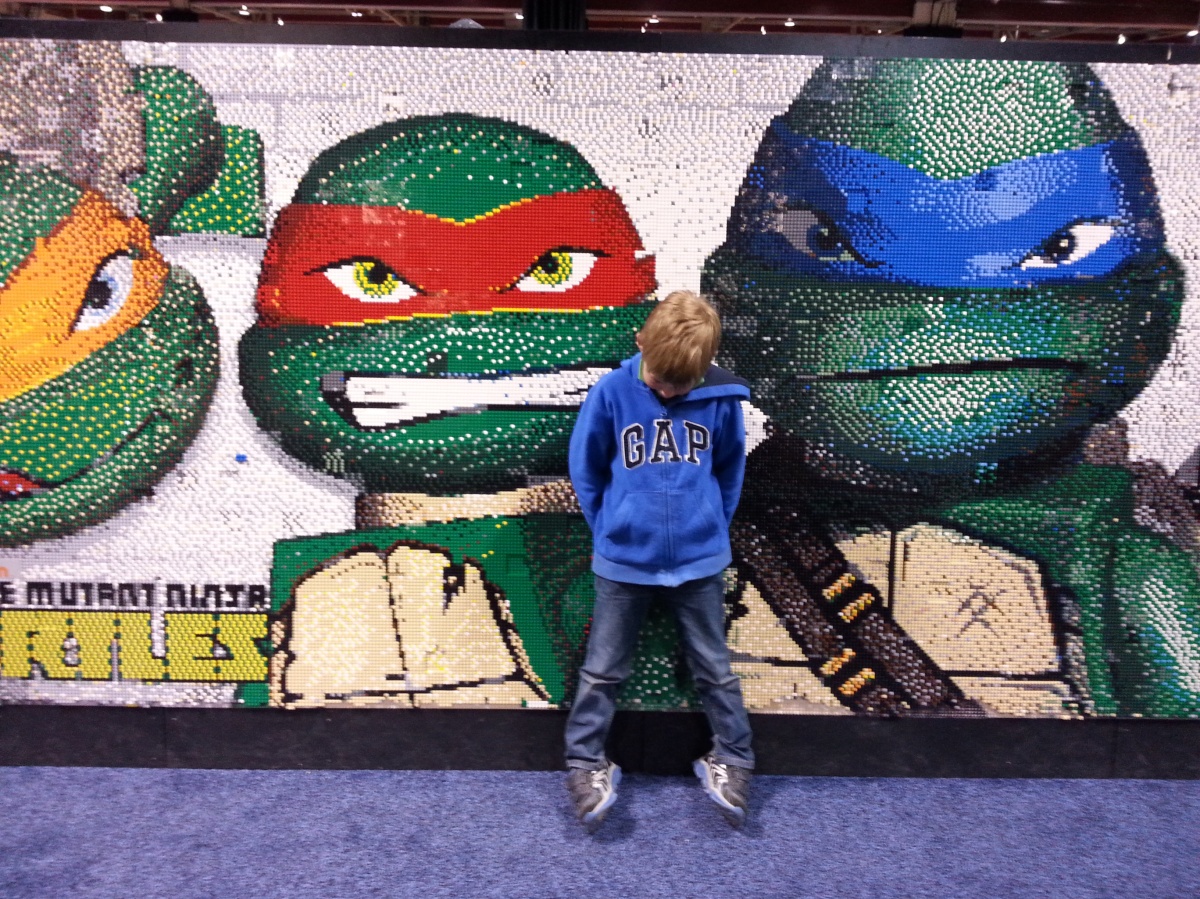 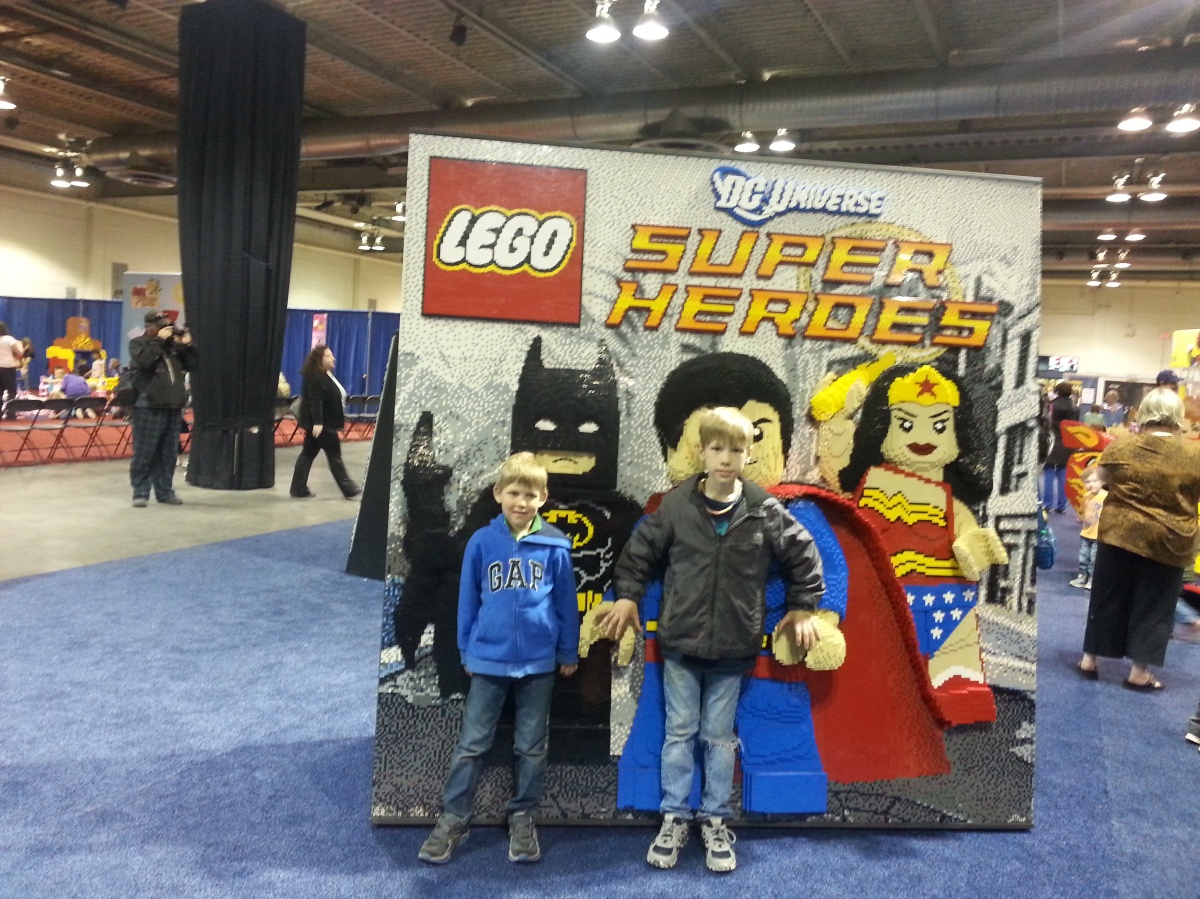 Just after 5:30pm, someone announced they were thirsty. Since it was near the dinner hour, everyone else in the place was hungry or thirsty, too.My only recourse was to join the masses and wait my turn for a $3 bottle of Dasani water. All while listening to an exceedingly boring tale about a diamond ring from the ladies standing behind me. It led me to the conclusion that there are two kinds of people in this world: those who feel no qualms about talking loudly in a public space and those who spare others the details of their lives.

So as not to give the impression that I was completely eavesdropping – though really, if you’re talking that loud next to a complete stranger, is it really ‘eavesdropping’ – I whiled away the halfanhourinline by responding to the professor’s texts.

J: Donde estas (That’s ‘where are you’ for those who missed Spanish 101)

N: Everything is awesome (That’s the theme song from the Lego Movie)

J: Do u have gorans jacket

J: No. Waiting for u

N: Well move on to something else

J: I can’t watch 3 kids and text. Hurry up (I think this was supposed to be an inside joke)

N: Next in line, finally

J: We r at hero factory. Listen for the meltdown.

By the time it was my turn to order, I’d concluded that, since we were still going to be at Legofest for the better part of 2 hours, I should buy some ‘food’ since I did not want to reprise the halfanhourinline experience. So I did the unthinkable and ordered 3 kid hot dogs along with my Dasani water.

I found my peeps and we plopped down in the middle of some Lego movie/commercial viewing. I divided 3 hot dogs among 5 people and bit into my hotdoghalf. The texture was akin to that of an old eraser. Unyielding, is one word that comes to mind. Disconcerting, is another.

‘Am I going to get some sort of food poisoning from this,’ I asked myself. Apparently the professor had thought the same thing. ‘Do you want another half,’ I offered. ‘Uh no thanks, my stomach is already hurting.’

After meandering through the art gallery where you could make little Lego art ‘canvases’ that were displayed for approximately 5 minutes before being dismantled by staff, we stopped at the racing area. And that is where we stayed, watching boys assemble cars and race them down the track. Over and over again. 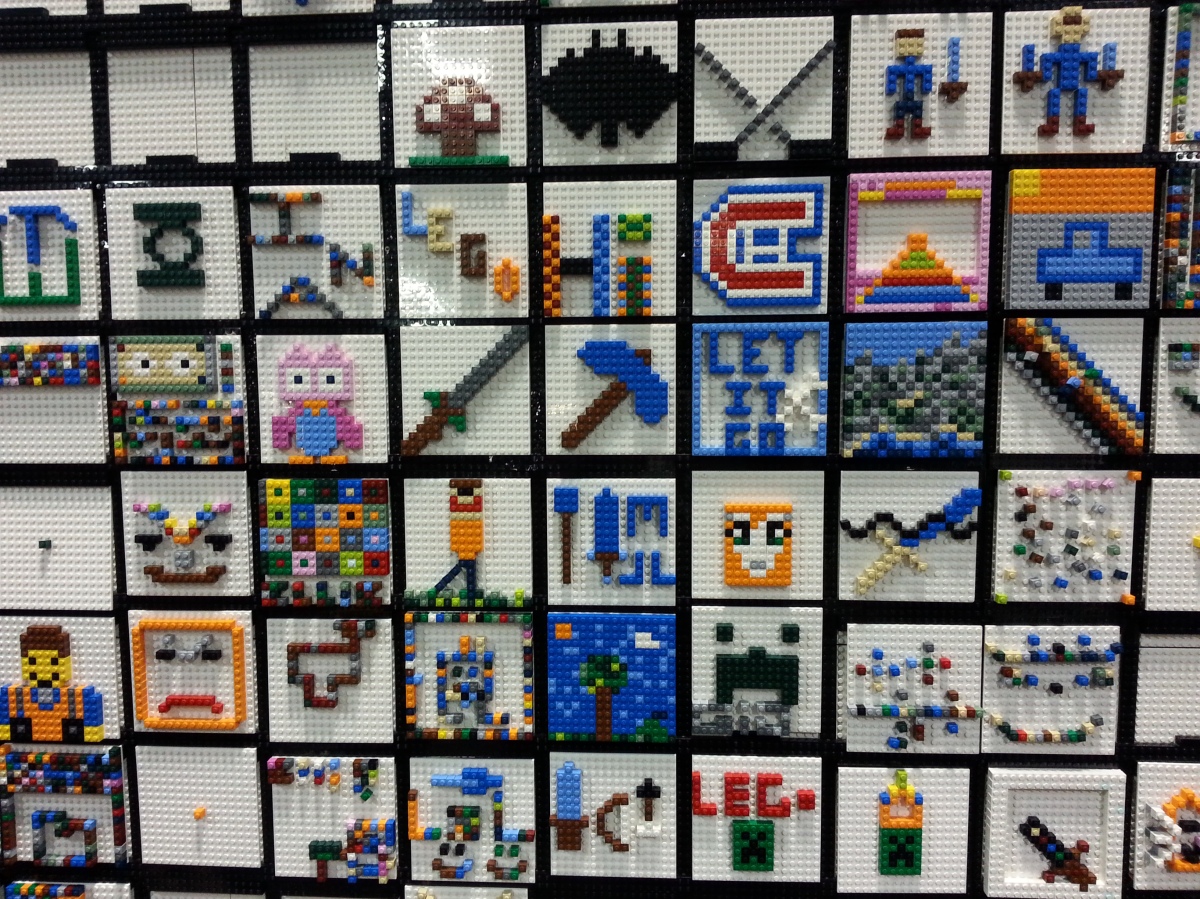 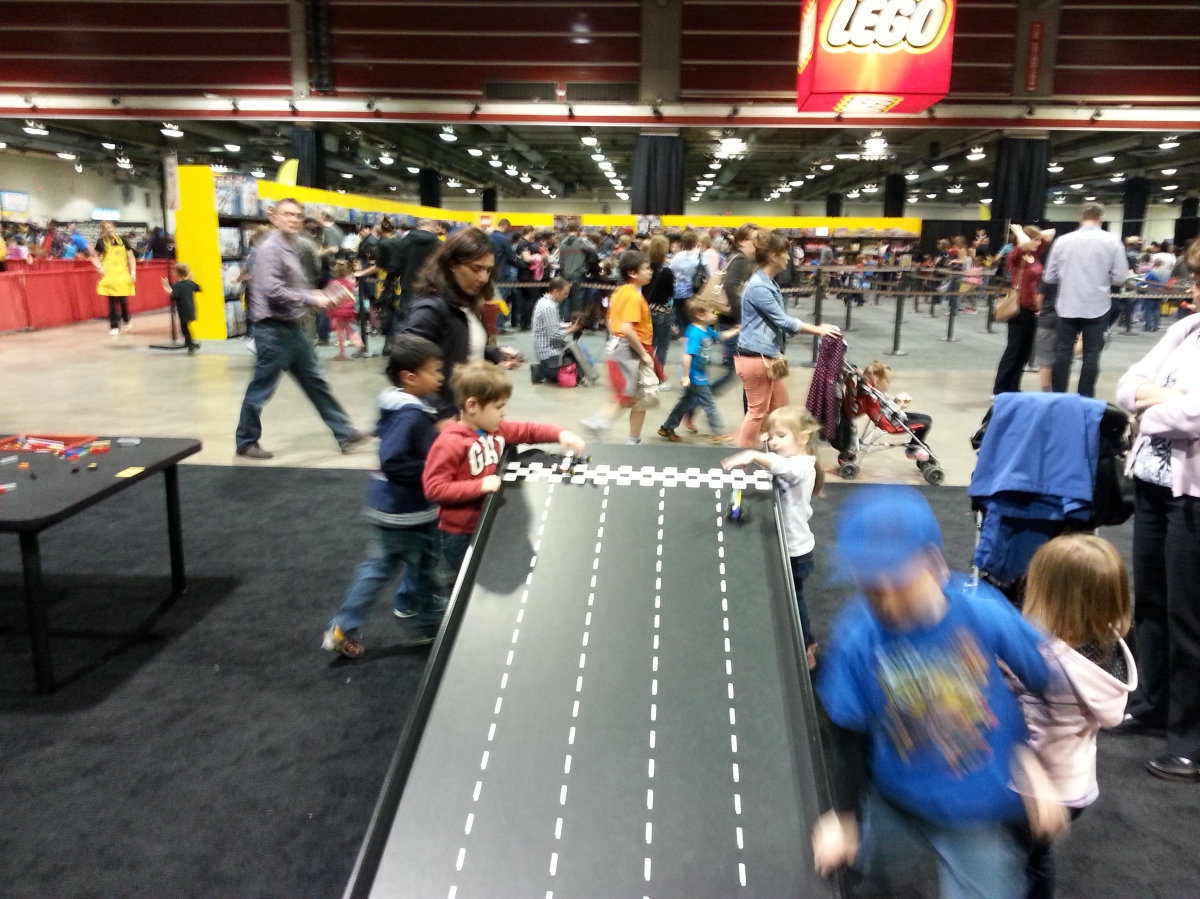 Half an hour later, it was the professor’s turn. ‘I’m good to go,’ he let me know. ‘But there’s still an hour left,’ I balked. ‘But then there will be a mass exodus and everyone will be trying to get on the train at the same time,’ he shuddered.

Which is how I agreed to leave 30 minutes before my fourhoursoffun was up. Because getting your money’s worth is one thing, but standing on a crowded train is an entirely different matter.

Just before we left, I noticed a Lego photo booth set up near the entrance – with 2 life-sized Lego characters. Percy had been fascinated with the Lego people all night long, so I felt obligated to stand in line for my turn with the bright yellow backdrop.

‘Sooo, we’re not actually standing in that picture, are we,’ the professor panicked. 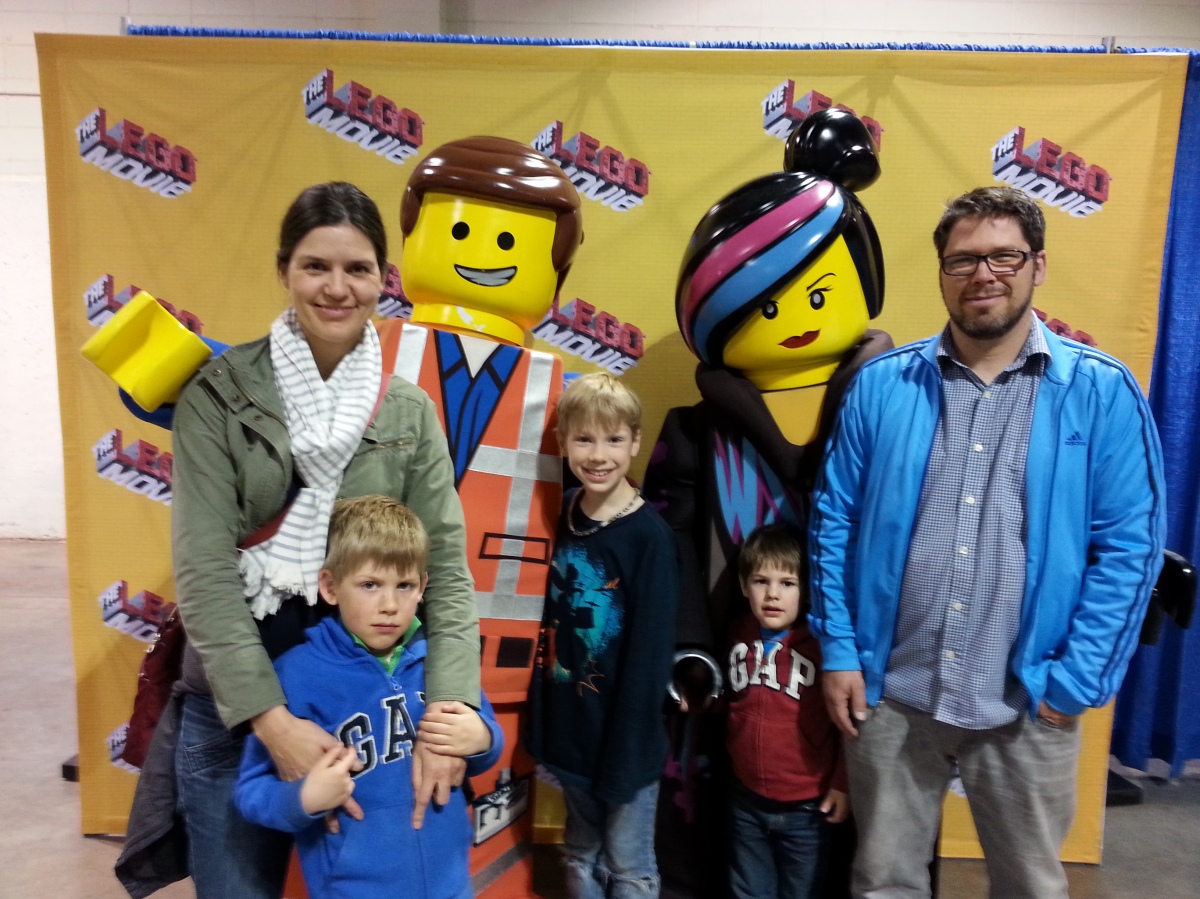 When we got home, we retreated to our respective corners of the house with pints of gelato in hand. We sat in our respective solitude for the better part of an hour.

2 thoughts on “Everything is Awesome”