A couple of weeks ago, I headed to Joey’s Restaurant for lunch with my ‘writer’s group’. We are, perhaps, the only group of four women on the planet who call ourselves a writer’s group, despite the fact that we don’t do any actual writing.

We speak, vaguely, of writing and then spend the bulk of our time together talking of other things: marriage, children, travel, work.

During my five year tenure in Calgary, I had never eaten at a Joey’s. I’d heard friends talk about eating there, but dismissed it as just another chain restaurant in the Moxie’s, Earl’s and Milestone genre. The same attractive (female!) servers dressed in [short, tight] black and the same menu, but with a different name.

Upon arriving we were taken upstairs to the patio. For me, the word ‘patio’ usually connotes images of a concrete slab with tables and chairs and, at the nicer places, umbrellas and potted plants in big containers. But this was an enclosed patio, allowing you to feel like you were [sort of] outdoors, but without the annoying aspects of al fresco dining.

Like the other night when we set the patio table chez nous because the weather was so beautiful, and I mentally kicked myself for not having eaten outside at all during the short-lived Calgary summer. And then we sat down with our actual food and a swarm of bees descended upon us and we hotfooted it back indoors and I remembered why I didn’t like eating outside.

But back to the restaurant. ‘Joey’s got sexy,’ my friend quipped, as we gazed at the black-dress-clad waitresses and the modern interior. We stared at our menus. I felt the need to be virtuous after a month of eating less-than-virtuously, so my eyes lingered on the salad section, scanning the options until I found the ‘500 Salad’. Its description featured words like quinoa and raw vegetables.

Though I told myself it would cancel out the glass of sangria accompanying it, I feared I’d just ordered the least-delicious-thing-ever. I crossed my fingers the note at the bottom of the menu, that it was designed by ‘Chef Chris Mills’ [whom I hadn’t heard of, though the words James Beard House and Iron Chef caught my attention] meant the food would be good. Ish?

A short while later the server delivered our plates to the table: chicken souvlaki, two caesar salads and my ‘medley of vegetables’, for lack of a better word. As first impressions go, I will say the salad looked pretty; green arugula folded into red quinoa and white barley, dotted with cauliflower, almonds, and thin slices of watermelon radish.

I took a bite and, for the next ten minutes, tuned out completely from whatever the writers were discussing as I consumed every last morsel of salad; pausing only to scribble on an errant receipt in my purse the ingredients I detected. I’m not one of those people who can detect ‘a hint of tahini’, so the list was fairly obvious, limited to what I could obviously see, or taste, or what was listed on the menu: arugula, barley, quinoa, cauliflower, fennel, kale, cherry tomatoes, avocado, cucumber, mint, almonds, soaked currants, all dressed with something bright and lemony.

When I’d cleared my plate, I returned my attention to my lunch companions. And my glass of sangria. We held court at our table for two hours, talking about this and that, when – on a whim – I suggested it was time for a writing assignment. Given our different writing styles and interests, I concluded the only genre that would work would be…..romance.

With a to-do on my list and a salad recipe in my purse, I bid my friends adieu and returned home.

A week later, I made the salad, sans currants and watermelon radish. ‘Do you like it,’ I asked the professor. ‘Yeah, it’s delicious,’ he agreed with my original assessment. ‘Good, because you’re going to be eating it a lot,’ I warned him. Since I have a [potentially annoying] habit of making dishes repeatedly when I find something I like.

Usually, after about five repeats, I take a break.

Three down, two more to go. 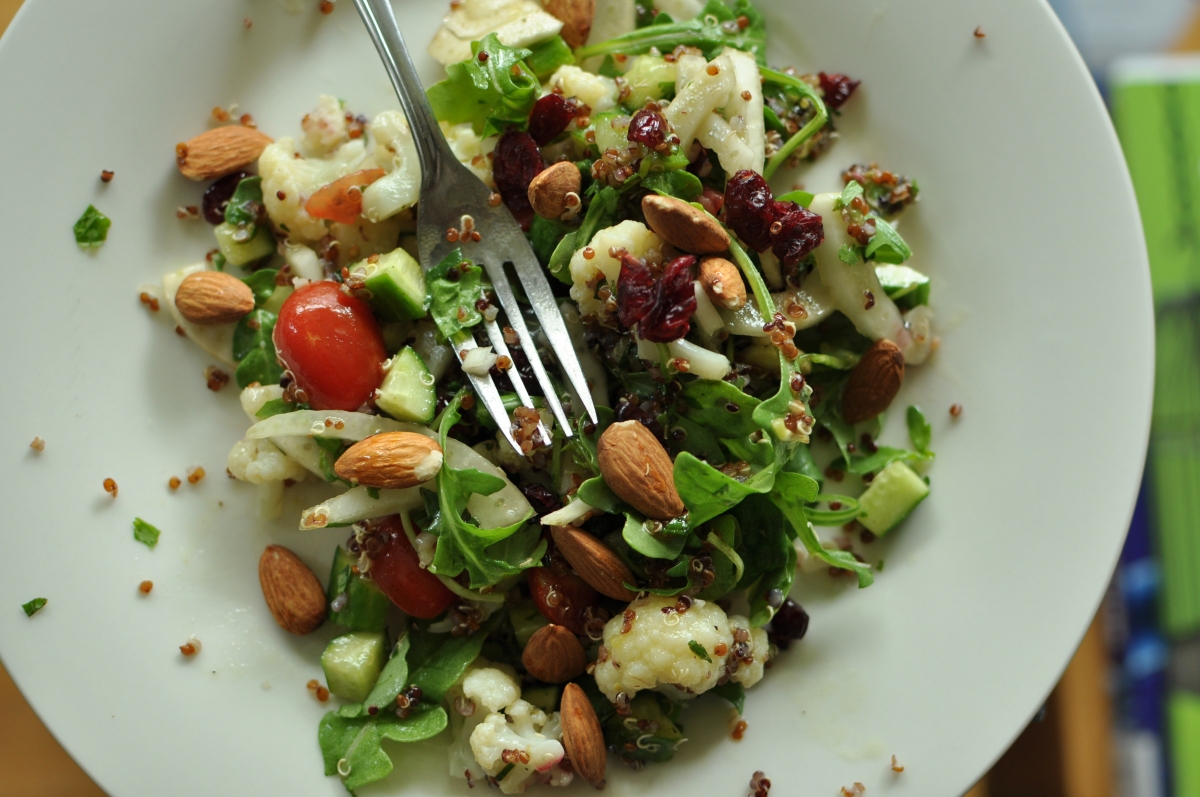