The first day of our [now, biannual] roadtrip to the Heartland is always the worst. It’s not as if I forget this fact, it’s just – much like childbirth – that I tend to misunderestimate exactly how ‘challenging’ those first ten or twelve hours of familial confinement au minivan really are.

The professor and I’d had a few discussions prior to our departure about possibly becoming people who leave first-thing in the morning, rather than leaving at 9:30 or 10 and driving well into the night. [Our discussions tend to be more theoretical (epistemological?) in nature and rarely translate into anything tangible.

Hence our departure on Saturday morning at a whopping 11:06. A.M.*

‘This is a new record, even for us,’ I quipped once we were all ensconced in the van. And then my mind flashed to the return trip circa 2010 when, after visiting with friends, we hopped in the car at 4 P.M. and made our way towards Bismarck.

‘Actually, probably not,’ I self-corrected.

We were just about to turn into the Starbucks drive-thru, when I received a text on my nonsmartphone. ‘Out of the country yet,’ a friend asked. ‘Um, Starbucks on 37th,’ I replied, adding ‘Not Kidding,’ lest my remark be misconstrued in any way.

Our initial – theoretical – goal had been to drive to Idaho Falls which, according to Google, was ten hours from Calgary. Given the timing of our departure, I figured we’d be hunkering down somewhere in Montana instead.

For the trip, each boy got to select their own personal snack of choice. The Gort chose a large bag of Skittles. The Hen asked for a bag of ‘Chicago Mix’ popcorn (which is cheese and caramel combined for the uninitiated), and Percy got Smarties.

At roughly 11:43am, the Hen managed to spill the entire bag of Chicago Mix all over the clean, non-smelling van interior. It seemed an inauspicious start. Much like when, 30 minutes earlier, the professor – on a cleaning binge – dumped out all of the quinoa I’d prepared for my [virtuous car snack.

One minute I was chopping peppers and cucumbers to add to the bowl of quinoa and when I looked up, I noticed my supergrain was missing. ‘Where’s the quinoa,’ I asked the professor who’d been doing dishes beside me. ‘I don’t know,’ he auto-replied, and then ‘actually, I do know. I threw it out.’

Back to the car-van. Shortly after the popcorn spillage, Thrift Shop popped up on the ipod. The edited version that says ‘this is [audible pause]’ing awesome. ‘That’s the title for my blog post,’ I told the professor.

At 11:52am, the Gort (with his trip camera in hand) bent down on the car floor and snapped a photo of the kernels. I suppressed a smile at the documentarian-in-training. ‘I see popcorn,’ Percy suddenly observed, as if he’d been somewhere else when ‘the incident’ occurred. ‘You’re going to be seeing popcorn for a while,’ I managed by way of reply.

At 11:56am, I glanced at Percy who was sitting in the seat behind the professor, happily watching the first of probably ten movies for the day. Something about his appearance was amiss, namely the seatbelt around his person. ‘Are you buckled,’ I asked though I felt certain of the answer. ‘No, Dad forgot to buckle me,’ he laughed.

At precisely 3:08pm we arrived at ‘The Border’ and the professor searched his ipod for Neil Diamond’s ‘Coming to America.’

[I’ve been listening to that song since the mid-eighties and on Saturday, courtesy of the professor, I figured out some of the lyrics.]

‘[When we pull up] I should ask the agent ‘how’s freedom’s light burning today?’ the professor remarked, undoubtedly hoping that border conversations were, in fact, being recorded. He’d made the mistake of getting out of a ‘short’ but ‘unmoving’ line of cars in favor of a longer but seemingly faster-moving one. Two minutes later he realized his mistake, when the RV that had been in front of us sailed on to the border agent while we remained parked. ‘I’m really rooting for them to have illegal immigrants in the back of that RV,’ he sighed. Bitterly.

At 5:08pm it became clear we were about to run out of gas. We crossed our fingers, hoping we’d make it to the metropolis of Great Falls since there is notmuch along that particular stretch of highway. Luckily a settlement named ‘Vaughn’ materialized, and we refueled (and rededicated ourselves to the cardinal trip rule of filling up when stopped – even if the gas tank is half full.)

[Forget the glass half-full or half-empty analogy, they should make it about a gas tank. I bet a lot of so-called ‘optimists’ would turn into ‘realists’ when pondering that circumstance.]

Following a trip to Target, some unsuccessful internet surfing in Helena’s Red Cross parking lot, a lackluster car-pizza dinner, and driving in a rainstorm, we pulled into the parking lot of the ‘Hotel on the Falls’ in Idaho Falls. At roughly 1 A.M. Where we were directed to sleeping quarters in a building separate from the actual hotel. ‘What, is this the stable,’ I muttered to the professor, feeling rather Joseph and Mary-ish. Though decidedly more ill-tempered than the original story suggests. (Not to mention older. And ‘with child’ in a much more tangible, triplicate, manner.)

As I drifted off to sleep [around 1:30] to the sound of 67 percent of my children crying, I vowed to become the person who gets on (and off!) the road early….ier. 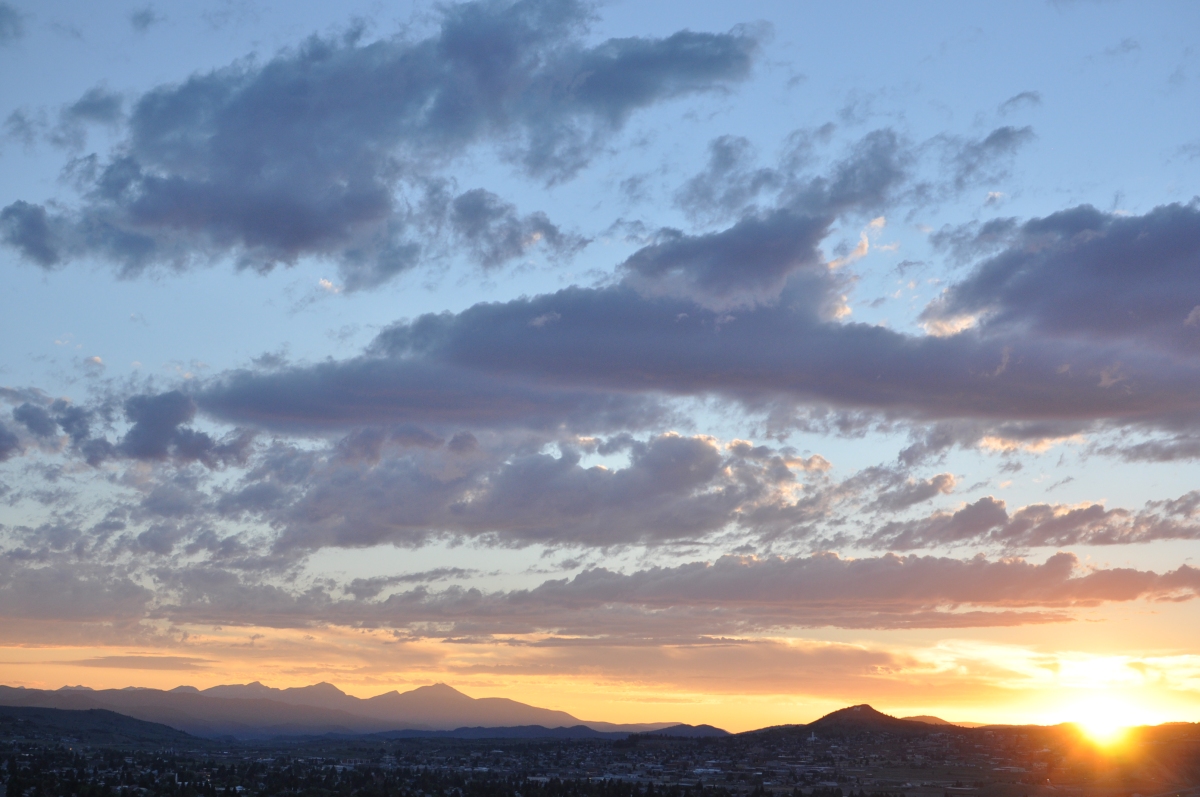