There was a moment during my most recent bout of single parenting that I thought to myself: ‘this is a lot easier than it used to be.’ I’m hard-pressed to recall the precise moment I thought it, or whether I truly believed it, but I did think it.

I guess it’s mainly that this time around I didn’t have that overwhelming feeling that I was going to implode from the 24-7 nature of it all [not that that’s ever happened before, ahem.] But, one minute it was Thursday and we were driving to the airport to drop off our paternus familias. And then I blinked a few times, scrubbed a few floors, and cut up a bunch of tissue paper, and it was Sunday and time to drive back to the airport to retrieve il professore.

Okay, not quite, but there was a moment when I stepped in the shower on Sunday morning and had a flashback to previous single-parent stints when I had to time showers to coincide with naps or bedtime because you can’t really let a nine-month old crawl around the house while you have a Calgon moment, or trust a three and a half year old to ‘watch’ his two-weeks old brother when you’re not in the room.

So it was nice to have a bit of breathing room this time around. To be able to take the boys to the bookstore on Friday night and not worry about a diaper bag or stroller or slightly-past-bedtime meltdowns. That being said, even with all of the advantages of older, more independent children, I still managed to lose a child.

We entered Indigo as a family of four; the two older boys charging towards the children’s section while I did my best to remind them (without yelling loud enough for everyone in the store to hear) that gentlemen don’t run! After all, ’twas the theme of the weekend: Gentlemen……Don’t.

With all three safely in the boundaries of the children’s area, I ducked into the Starbucks kiosk for my dinner: a tea latte. And by the time I’d collected my drink and walked the fifteen paces to the children’s section, Percy was nowhere to be found. The Gort was sitting on the floor reading books. ‘Where’s Percy?’ I all-but-panicked. ‘I dunno,’ came the helpful response. ‘Where’s the Hen?’ I tried again. ‘I dunno.’ Luckily I found the Hen near the Schleich display doing his best to read the latest volume of Captain Underpants.

Just when I was about to start racing around the store, I saw a bespectacled employee holding hands with a little person, my little person, walking towards the children’s section. ‘We were going to page you,’ a cashier later explained as I paid for my Pixar’s Greatest Hits CD, ‘but when we asked him what your name was he said ‘Mommy.’

When we got back in the car, I turned to the 3 year old in the backseat, ‘What’s my name?’ ‘Nicola,’ he answered, ‘but I don’t tell people when they ask me.’ 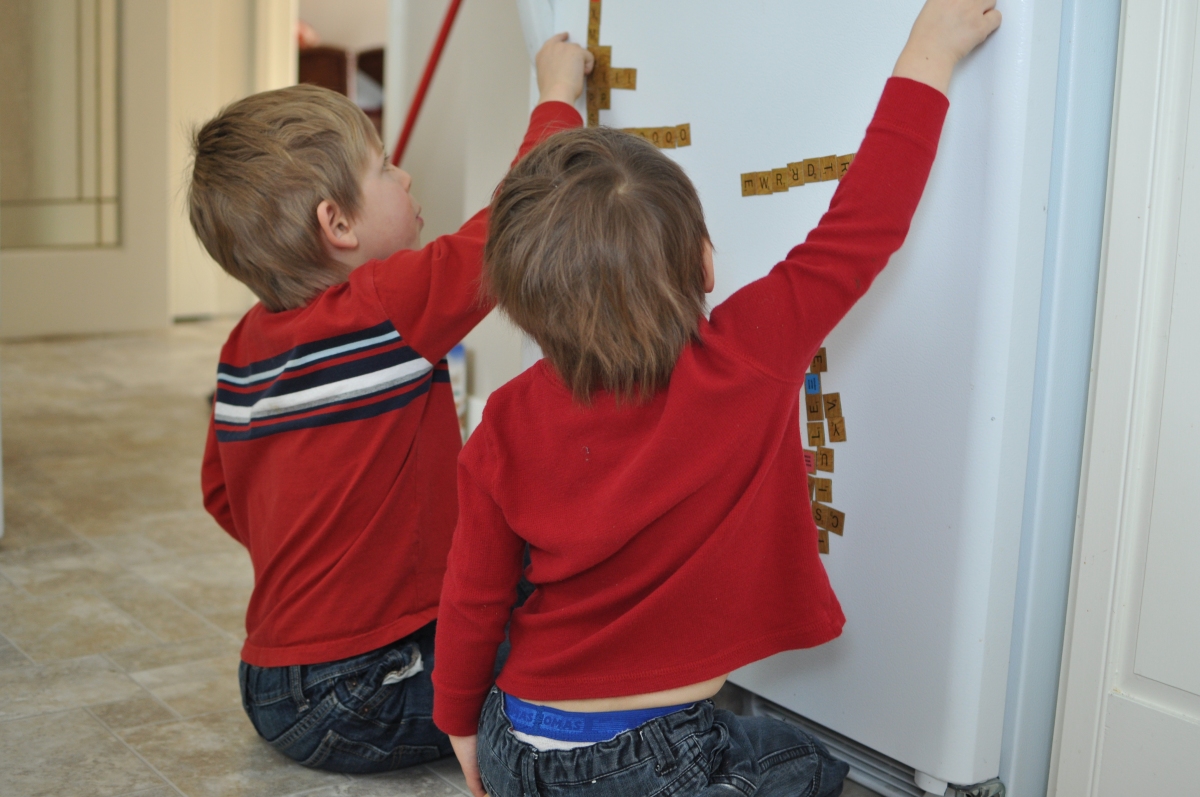 It takes a village…….to get Percy dressed

Along with relatively uncomplicated outings, older children tend to sleep in a little bit. [And by little bit, I mean 7:30 or 7:45am.] And they occasionally sleep through the night. I woke up on Sunday at 6:45. There was no one crowding me out of my bed and I’d slept for seven hours. Straight. ‘What is this strange, awake, feeling,’ I thought to myself.

But there is a downside to having older, more independent children, and that is bed-time. As the clock struck eight, then nine and inched towards ten one night, I remembered the days when I’d plop the baby in the crib, close the door and still have two or three hours to myself. [Assuming said baby cooperated, of course.] But now the ‘babies’ say things like, ‘you promised we could have a family movie,’ and I find myself sitting on the floor not-really-watching The Missing Lynx, wondering if I will ever get to read the February issue of Martha Stewart Living lying on the coffee table.

We picked up the professor on Sunday and had celebratory burgers and fries at Clive Burger. After an hour of being reunited with his spawn, his face had a vaguely shell-shocked appearance, as though it were all too much. ‘You’ve been with them an hour,’ I reminded him, ‘I was with them for four days.’

[I’m still wondering whether ‘The Peg’ or our domestic life equals ‘Nam in that analogy.]

Apparently we all needed time to re-acclimate, because at 2am, the Gort (?!) crawled into my bed after a bad dream. At 4am, Percy cried, ‘I want Mommy,’ at which point I banished the professor to his oldest son’s unoccupied bed. And shortly thereafter the Hen got sick. And again at 6:30.

When 7:30 finally came, I could scarcely pry my eyelids apart to squint at the alarm clock.