It was Saturday morning and the oppressive* heat had abated somewhat, so we continued our clumsy quest to become ‘an outdoorsy family’ and ventured to Fish Creek Park. With boys and bikes in tow.

Of course, saying ‘we went to Fish Creek Park’ makes it sound like that was the plan all along. That we woke up and said ‘let’s go to Fish Creek today’, but that’s of course not how it happened. The Johnsons don’t really operate that way.

Just as we turned into the park entrance, I had a flashback to last summer. And the summer before that.

‘We forgot bug spray,’ I lamented. And the professor, cognizant of the terrorists that occupy the summer airspace at Fish Creek, said something like ‘oh boy.’

And we possibly both thought-hoped ‘maybe it won’t be that bad.’

But it was. The terrorists were out and looking for blood. Johnson blood. At one point the Hen was desperately trying to ride his bike with one hand while swatting madly at the determined insects seriously lacking in social skills. 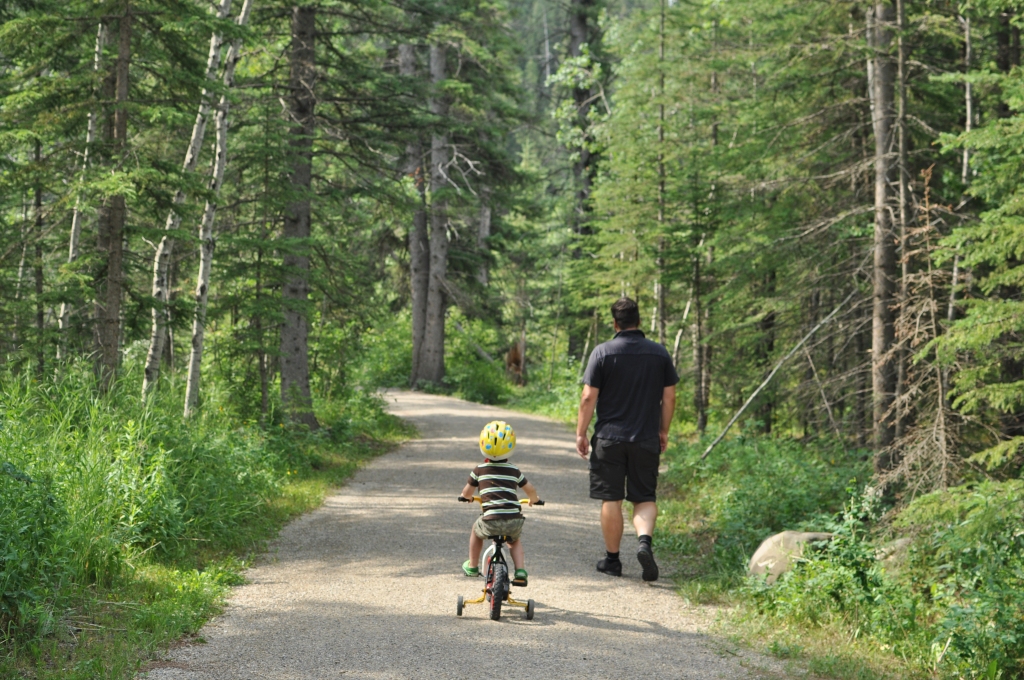 Allow me to say, I have a problem with the above image. One week ago, Percy was tooling around our backyard on a tricycle. Perfectly appropriate and adorable for a kid who is not yet three. And then, boom, he decided he was really more of a bike-man, turned up his nose at the Kettler trike that had been his best friend and moved on to his middle brother’s former bike. And suddenly, without my consent, I became a mother of three boys who ride regular bikes. [At least he’s still wearing the ridiculous Elmo bike helmet, otherwise I’d be inconsolable.]

He even fell off the bike – going too fast around a curve – and emerged from the side of the trail as if it had been nothing.

[*Oppressive being a relative concept, since Calgary temperatures did not quite match the heat south of the border.]