The Hen woke up just before 2am. I staggered out of bed to see what was the matter. ‘I need a drink,’ he croaked in a sleepy voice. It was possibly the 4th time I’d gotten up in two hours and I might have been a little annoyed. I got him the drink. ‘Good night,’ I offered and walked back to my room. I climbed back under the covers and did my best to induce sleep.

‘I need music,’ he croaked a few minutes later. Instead of, say, telling me when I was in his room. I climbed back out of bed and stumbled across the hallway, doing my bleary-eyed best to find the pesky ‘play’ button on his cd player. ‘Good night,’ I barked and staggered back to my bed.

I tried to fall asleep but within seconds, I knew. I’d missed the ‘go back to sleep’ bus and it would be hours until the next one arrived. Minutes later, I heard footsteps. Suddenly the barely audible music was noticeably louder.

I lay there, annoyed by the music and the fact that I was awake. But too tired to do anything about it. Many minutes later I heard the voice again: ‘I can’t sleep’. I didn’t have the energy to get up again, so we bantered through the walls. ‘Turn the music down, you can’t play music that loud, you’re supposed to be sleeping.’ ‘I can’t sleep.’ ‘If you don’t fall asleep right now, you can’t go to Asha’s birthday party tomorrow.’ [Today].

It was a lame, bordering on pointless, argument. But it worked. And just before the clock struck 4, we were both asleep again.

I was slightly worried about the birthday party in question because the invitation had specified ‘dress like a fairy or a woodland creature’. And I’m a literal person – I take written instructions fairly seriously.

So though I would have much preferred to hide in my bed and try to harness some of the REM sleep I’d forfeited in the night, I dragged myself out of bed to tackle the matter of the ‘woodland creature’.

‘Do you want to be a fairy?’ ‘No! That’s for girls?’ ‘You could be a dwarf,’ I ventured – googling images of Snow White and the 7 dwarfs. [Dwarves?] ‘That’s not politically correct,’ the professor informed-reminded. ‘What about an elf? A gnome?!’ I offered, remembering the spectacular garden gnomes the lady in front of us at Sunnyside Nursery had purchased.

And so, with operation gnome-in-less-than-one-hour under way, I hauled my sewing machine upstairs and sewed two red felt triangles together and called it a gnome hat. I dug through the boys’ closets searching for a pair of fleece long underwear, and turned in the collar of a faded blue jacket to approximate a tunic. I found a pair of well worn, slightly small Doc Martens boots and called it good.

The Hen looked adorable and, upon hearing his father’s enthusiastic feedback, was delighted to wear his ‘costume’.

With thirty minutes to go, I turned my eyes to Percy, who was also invited to the party. I tried to persuade him to don the purple ‘wizard’ costume he wore for Halloween two years ago. He refused, objecting by wailing and throwing himself on the floor, replicating the very same angry face I remembered from the trick-or-treating photographs. Finally he said ‘I want a hat like that,’ pointing to the Hen’s red triangle-hat. ‘So, if I make you one of these you will wear it?’ I stipulated. He grunted – something that could mean ‘maybe’ or ‘absolutely not’.

I took a chance. I sewed two more red triangles together and put the finished product on his head. And I realized the grunt had meant ‘absolutely not.’ The professor and I both tried various approaches to get him to wear a blue shirt [tunic] and red pants and too-big soccer cleats. [They seemed gnome-ish.] ‘Those aren’t my shoes,’ he yelled while writhing on the ground.

While it was a tempting thought – hanging out with an ultra grumpy non woodland creature for three hours – I opted to disinvite him. So the Hen and I went to the party, alone. 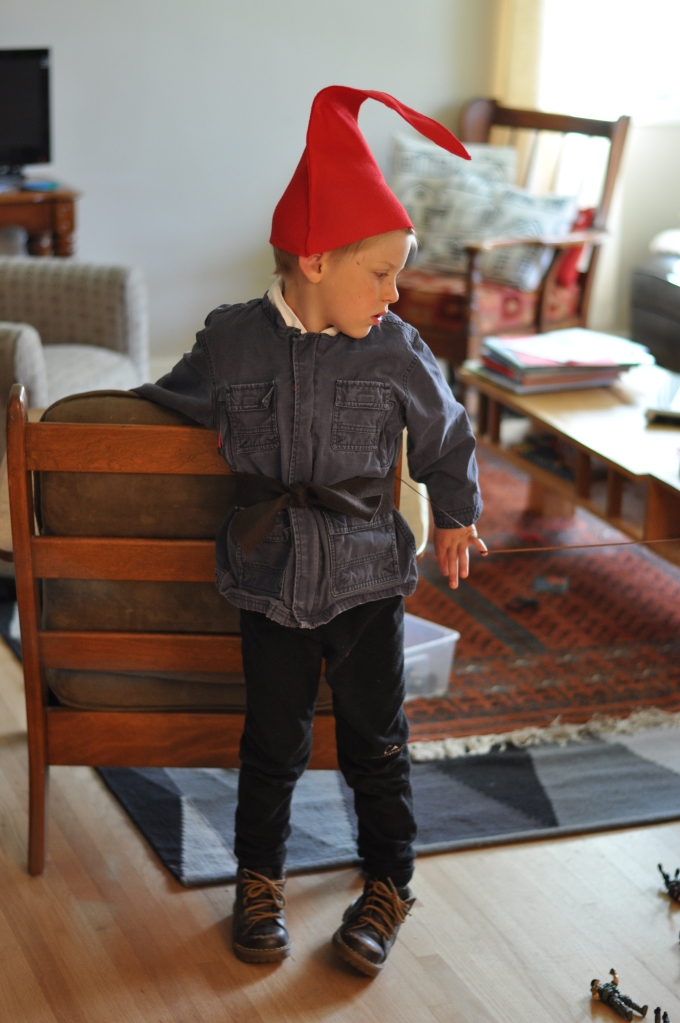 Where he met a unicorn and fell in love. 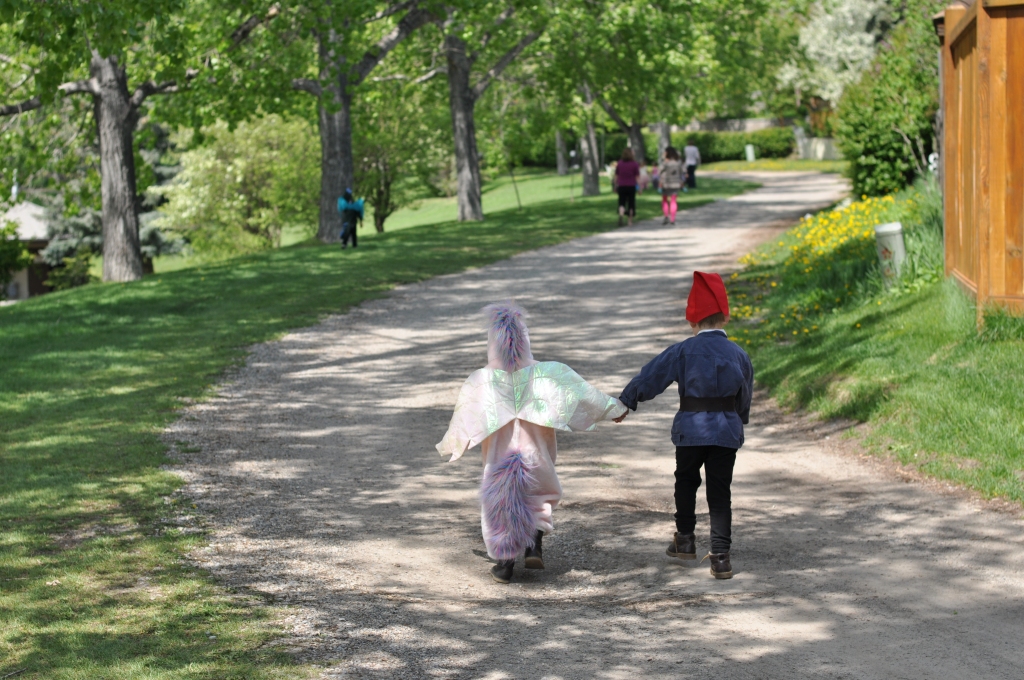 Several hours later, I found myself semi-dozing on the couch at home. ‘Look at Percy,’ I heard the Gort say to his Dad. And, with squinty eyes, I ascertained that young Percy was wearing the wizard costume (including the hat) he had refused somewhat violently earlier in the day. And he was grinning.The professor could barely contain his howling at the continued display of my boys doing their best to ‘como se dice‘ me. ‘He’s just writing the rest of the blog for you,’ he shook his head semi-sympathetically. And then Percy squatted beside his Dad and asked him for help…..with putting on the not-my-shoes cleats he’d also refused. 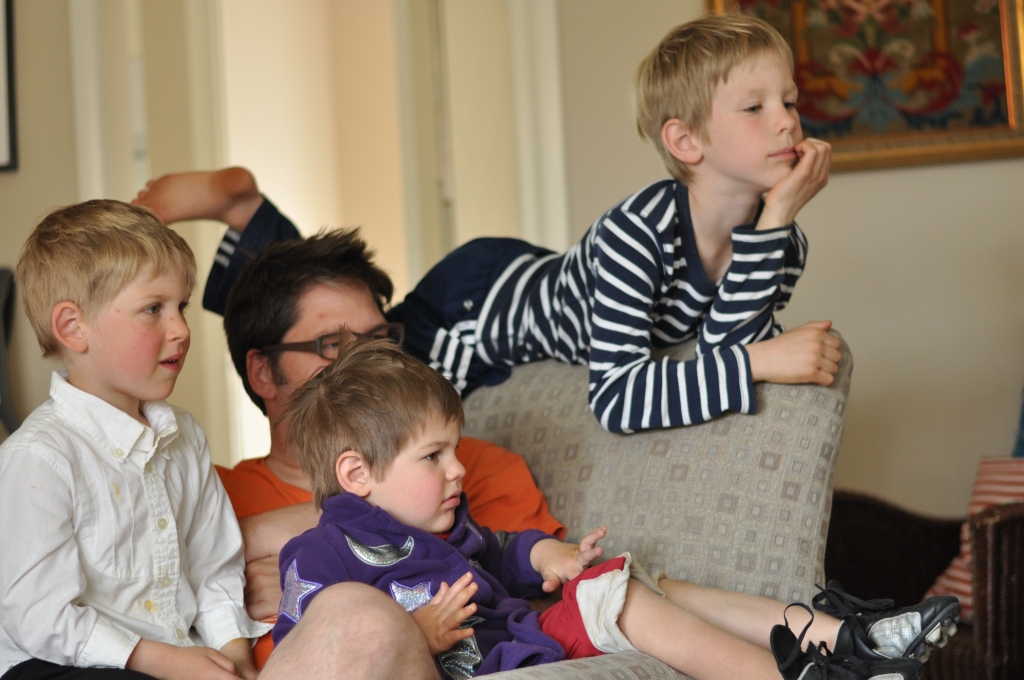 Even better, he wore the robe for the rest of the afternoon and into the evening.

I couldn’t make this stuff up if I tried.