I really thought I was going to be on top of it this advent season. I started making Christmas cards…in early November. I diligently searched for ideas for advent calendars and stockings.….

And then it was 30 November. And I’d finished half of the Christmas cards. The sewing machine was making a horrendous noise. And I hadn’t even thought about the advent calendar.

Of course, I could have used the one I made for 2009, but that seemed ‘lazy’, somehow. [Or is that what people call ‘tradition’? It may very well be, which means I’m tradition-less.

At two o’clock yesterday afternoon (less than ten hours before it would be December 1st) I decided to fashion a calendar from watercolor paper and…..I didn’t know what else. Make it up as you go, that’s my philosophy it seems. Planning ahead? Organizing? Why bother!

I cut out enough squares for the twenty-five (twenty-four?) days on said calendar. I had visions of waiting until the professor got home and all of us gathering around the table; each one producing unique, beautiful pieces of art that I’d fashion together in a collage and label with dates.

And call it an advent calendar.

I approached the boys about the project, after school. ‘That sounds like fun,’ the Gort replied enthusiastically. Until he heard my restrictions….’Christmas’ colors…..’horizontal layout’. He drew a picture of a Christmas tree, but his heart wasn’t in it. ‘Is it okay if I make blue snowflakes’, he asked, ‘because I made blue snowflakes at school.’ If it happened at school, that means it’s legitimate.

Against my better judgment, I relented and accepted blue snowflakes. Though blue is not exactly what I’d call a ‘Christmas’ color. And snowflakes are not actually blue. And then he quit. ‘I don’t want to do this anymore.’ One square down, twenty-four (twenty-three?) to go. I asked the Hen to make a contribution. He took a red marker and made an ill-formed colored dot in the center of the card. And then he grabbed a second card and made a similar dot with a green marker.

Not at all what I’d envisioned.

It was well past nine by the time the professor and I sat down at the table and I pushed the stack of cards in his direction. ‘We need to make an advent calendar,’ I announced. He grumbled his displeasure over the matter and began the un-exciting work of producing Christmas-y images on little pieces of white paper. What exactly constitutes an advent image? Bell? Snowflake? Starbucks red cup? Boot?

I looked up from my cards to see what he’d made. And then I saw it. A Christmas tree. A vertical – portrait orientation – Christmas tree. Somebody hadn’t gotten the memo. Or they’d gone rogue and ignored the memo.

He pleaded ignorance about the ‘landscape layout’ rule. I pointed at the already-finished [horizontal] cards ‘which way are they laid out?’

‘Is that a rhetorical question?’ he stalled.

At 11.30 we had twenty-four usable pieces of watercolor paper. Twenty-four unfastened, un-arranged, pieces of paper.

And then we went to bed. There would be no advent calendar at the breakfast table this December 1st. ‘Twould have to be the dinner table. 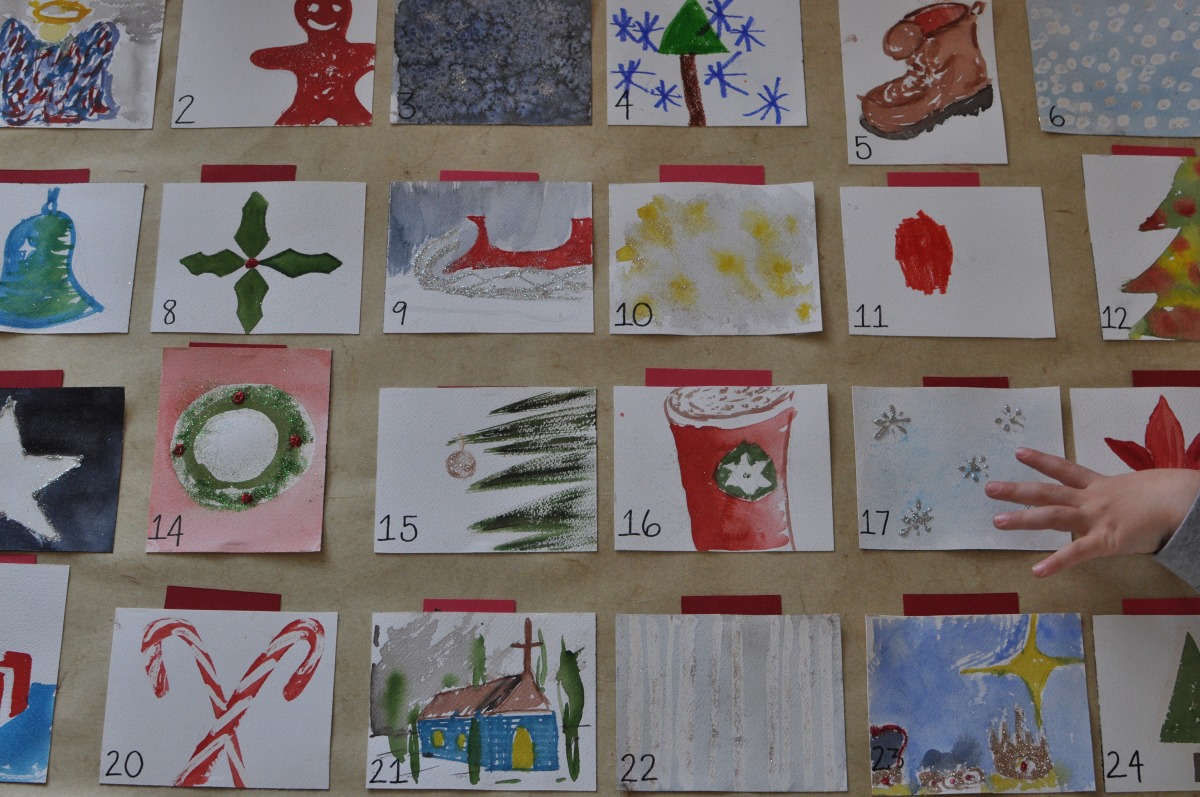