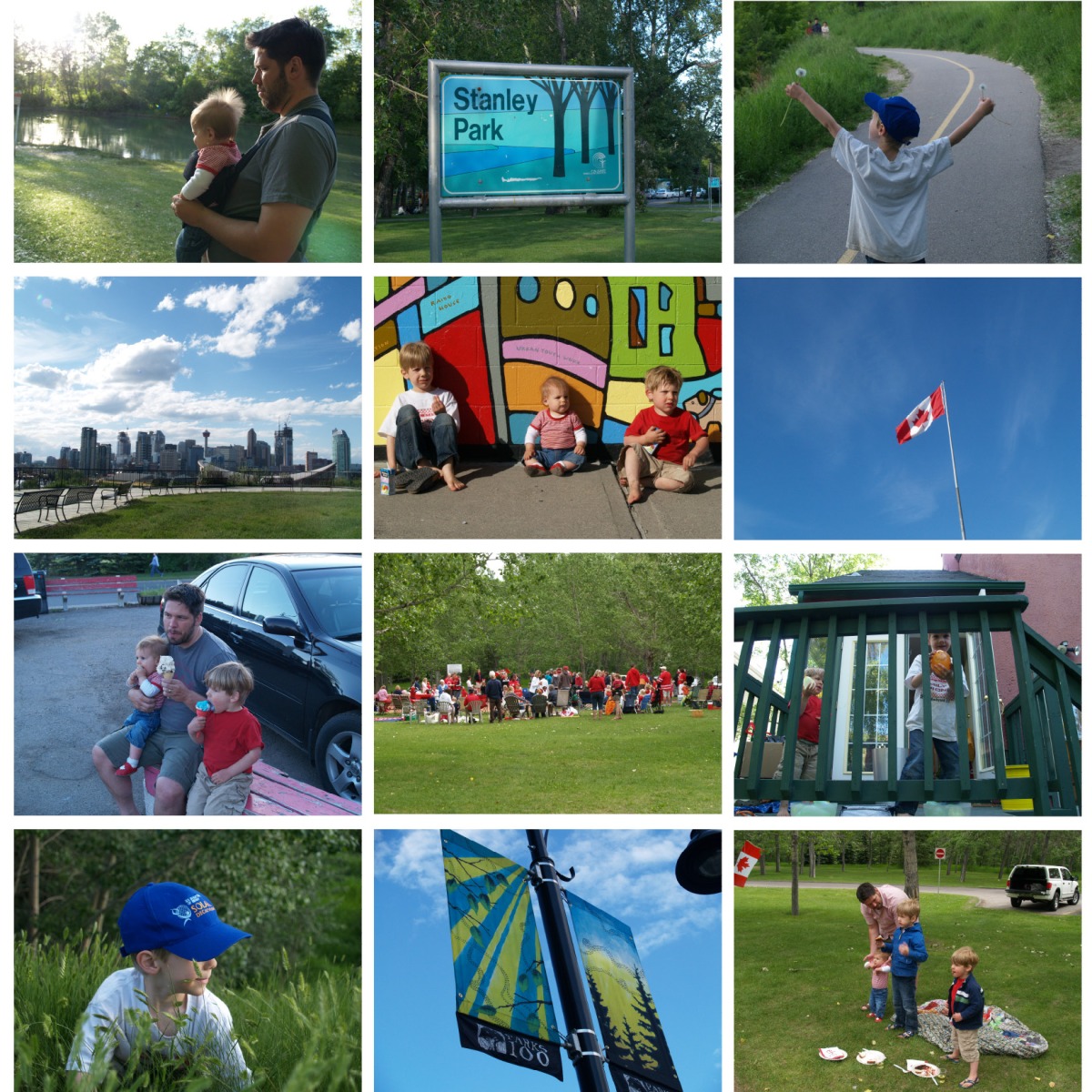 ‘How many more days until Canada Day?’ my oldest asked me on Tuesday. I told him and thought he would say ‘and how many more days until July 4th’ next. But he didn’t. Instead he said ‘because we’re going to need Canada flags and to paint our faces red.’ Apparently he fancies himself a bit of a Canadian these days.

My first recollections of Canada Day 2010 are of the Hen’s semi-awake, wobbly face. And the alarm clock displaying the numbers 5:59. The Hen runs into our room almost every morning now and climbs onto my side of the bed where he lies for a bit. Until his brother runs into the room and tries to climb on at the same spot and they have a vigorous fight about it. These precious moments are happening increasingly earlier which makes them decidedly less precious.

I woke up a bit later to the sounds of our neighbor retching-coughing thanks to our open bedroom window. It wasn’t pleasant and actually scared the Hen, who woke up with a start. And jumped out of bed. I coaxed him back in and we slumbered some more. I guess his habit of falling asleep after 10 is wearing him out.

We finally dragged ourselves out of bed around 8.30. Less than an hour before we were supposed to arrive at a waffle breakfast gathering in the park. I was in the kitchen making coffee when I heard Jason tell his over-excited oldest ‘we’re not actually Canadian. We’re American.’ He’d said it right after the Gort had regaled us with his version of ‘O Canada’. Sung in ‘Spanish’ according to him.

But, really, it’s just him singing ‘O Canada’ and then humming for a very long time because he doesn’t know any of the words until the ‘glorious and free…we stand on guard for thee’ bit.

Precisely around 9.30 our Henners tossed his cookies in the hallway downstairs while his parents were upstairs scrambling to get ready. I heard the Gort say ‘I’ll go tell mom and dad,’ before running up the stairs to tell me what I already knew. Then it was another thirty minutes of looking for the carpet spray and debating whether the kid was actually sick. Or if he’d just had some weird reaction to Canada Day.

Since he noticeably perked up afterwards, we decided that it was a one-off and hurriedly gathered kids and blanket and jackets before heading to the car-van. When I got to the car-van the temperature was 59 degrees. On the first day of July. Oh Calgary you never cease to amaze me.

Canada Day unfolded as most days unfold around here; one activity leading to another with little concrete plans. There was the excursion to the park for waffles with strawberries and whipped cream. To which we were 45 minutes late on account of Mr. Puky and his lazy parents who refuse to get on board with the fact that it takes this family of five at least ninety minutes to get out of the house.

Afterwards we drifted home so the littlest two could nap and to bake cookies for an afternoon potluck. While I melted chocolate and butter, the Gort and I ‘drafted’ our packing list for our imminent journey to the Midwest. It’s a serious exercise in mom-tasking; to stand at a stove mixing ingredients, while making up an actual packing list and condensing the activities into two words (that are then spelled or sounded out) for the not-quite-yet-literate six year old.

‘Pack Clothes.’ ‘How do you spell pack?’ ‘Well, what letter to you think Pack starts with?’ ‘A p!’ ‘What letter makes the ah sound in Pack?’ ‘A!’ he guessed. And on it went for every single letter of every single word.

Pack Movies. Pack DVD Playe (he ran out of room for the r). Pack Baby Stuff. Pack Pillow and Blanket (not sure which letters actually made it to paper).

‘I know how to write pack without looking!’ he told me excitedly. At least I’m not laboring in vain.

The afternoon potluck morphed into a soccer game for the professor while I took my turn watching the three boys. At a playground. As we drove home I asked my crew ‘who wants to go for a walk?’ To which the reply was silence followed by ‘I want to go home and play with water balloons.’

I’m so outnumbered it’s not even funny. So we went home and played with water balloons. And then we got back in the car to visit the nearby summer farmer’s market – which turned out to be closed forty five minutes early – and to go for a walk in Stanley Park.

I could see the Gort was going to bail after about five minutes of walking, so I bribed him with ice cream. ‘If you do a good job on the walk, we can stop at the ice cream shop on our way home,’ I promised. While silently begging the ice cream shop to be open.

It was close to 9 by the time we arrived at the frozen dairy shop. The Gort selected strawberry yogurt for his cone. And the Hen chose a blue confection known as ‘wet paint’. Which worried me. Would it taste like wet paint? Smell like wet paint?

‘Can we come to this ice cream shop again?’ the Gort asked while sitting on the bench licking his cone, ‘because it’s lovely.’

It was probably after ten by the time they were bathed and ensconced in their beds. ‘What was your favorite part of today,’ I asked my oldest, wondering which of the day’s fun activities he’d pick: waffles, playgrounds, trampolines, water balloons, ice cream….

‘Playing football at the park with Adrian,’ he replied.