It was Wednesday evening and I found myself headed to suburbia for a book club meeting. As I drove west in my car-van, through a mess of construction, I couldn’t help but notice how bright it was outside. So bright the woman driving in front of me, in her gold Lexus SUV, slammed on the brakes….at a green lighted intersection. Because she couldn’t tell what color the stoplight was.

I had a few choice sentiments for her as I continued on my way into the adjacent strip mall. Where I almost collided with a fancy black BMW because I couldn’t see a thing. Make no mistake, on occasion, Calgary can be a blindingly bright place to be. But this was unusually bad.

And the drizzle that had accompanied me on my drive turned into rain. Frazzled, I drove around the parking lot; eventually pulling over to the side because I couldn’t find the ice cream place where I was supposed to meet my fellow book readers. As I looked around for the Marble Slab Creamery, I glanced up at the sky and saw an enormous double rainbow.

I really don’t know if I’ve ever seen a double rainbow but I know I’ve never seen such a brightly colored rainbow in all of my existence.

It was incredible. Astonishing. And my semi-functioning camera was nowhere to be found. I phoned the professor and begged him to go outside to take some pictures of the rainbow(s). He called back several minutes later to let me know that he’d failed. Apparently the rainbow was not visible from our abode. And he was clearly not interested in walking around the neighborhood, with three kids in tow, in search of an amazing rainbow.

That’s something I’d do.

As I ended the call, it occurred to me that I was in possession of a cellular phone. And that many cellular phones have the ability to take photographs. With an incompetent thumb, I scrolled through the menu until I found something resembling a camera icon. And, with my lousy bright red un-iphone, I stood in the parking lot aiming my subpar camera into the blinding light. Hoping that I’d end up with something resembling a rainbow. 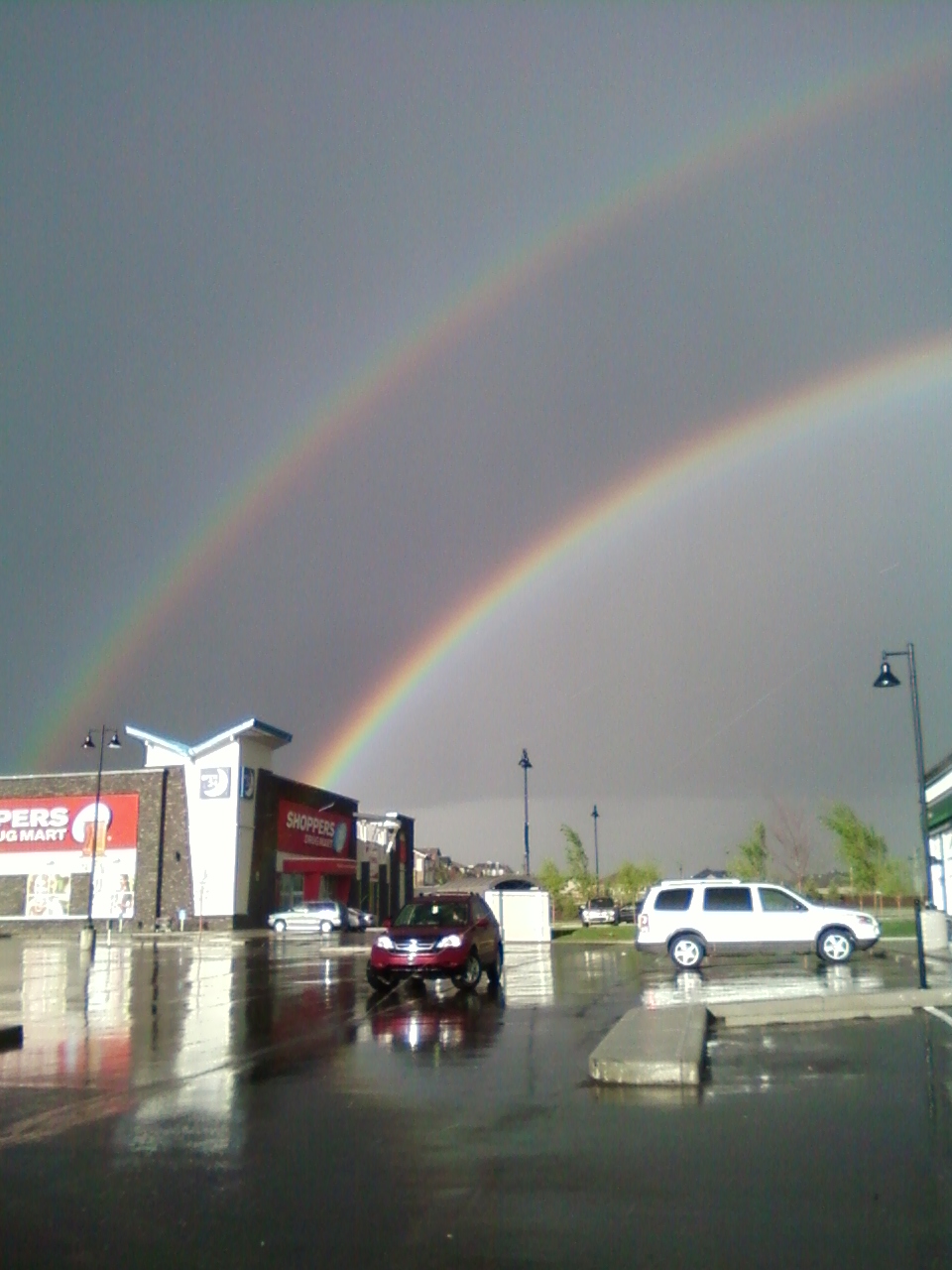 It had been a weird day. An earthquake in Montreal. An interminable tennis match at Wimbledon. The US team had managed to score a goal…and it ‘counted’. And there was this crazy double rainbow in Calgary.

Definitely one for the history books.

So I headed home. When I was ten minutes from home, I called the professor. Again. ‘Can you get the boys ready, I’m coming home. They need to see this rainbow.’ To which he replied ‘you’ve got to be KIDDING me! I just put them to bed.’ Which doesn’t mean a whole lot in our house. It just means that the boys are upstairs running around in their room. It does not, under any circumstances, mean that anyone is actually asleep.

‘Fine.’ I concluded the call.

Which is basically fourteen-years-marriage speak for ‘I guess I’ll be the parent who is committed to showing our children the wonders of the world while you, the lesser parent, can sit on the couch and watch The Hangover.’

When I got home the boys were standing on the stairs ready to be whisked away on the adventure of their lives. I grabbed my crappy camera and loaded the blondies in the car-van, and the three of us sped off in search of the amazing rainbow(s). Little did I know the professor and his mini-me were inside the house preparing to join us, until they heard the squealing tires and realized they’d been left behind.

I pulled over at a neighborhood school to snap a picture of the crazy rainbow. When I put my camera in front of my face, I realized that I couldn’t get the entire rainbow in the frame. I guess that’s why they call it a zoom lens. I’d never felt so thwarted in my life as I stood by the fence snapping pictures of…a quarter-rainbow.

‘Should we go get ice cream?’ I asked my boys. Certain they were going to clamor with excitement at the prospect of getting ice cream after their supposed bedtime. ‘No,’ my oldest decided. ‘It’s kind of cold and it’s late. We can just get ice cream tomorrow.’

‘We can just go play soccer,’ he suggested.

I had to laugh that our seemingly disinterested soccer player had actually requested – during the final week of the soccer season – to play soccer. Voluntarily. Without anyone begging or bribing him.

So we rainbow-chased. And we took pictures. And we played soccer. (For two minutes). And it was kind of magical. 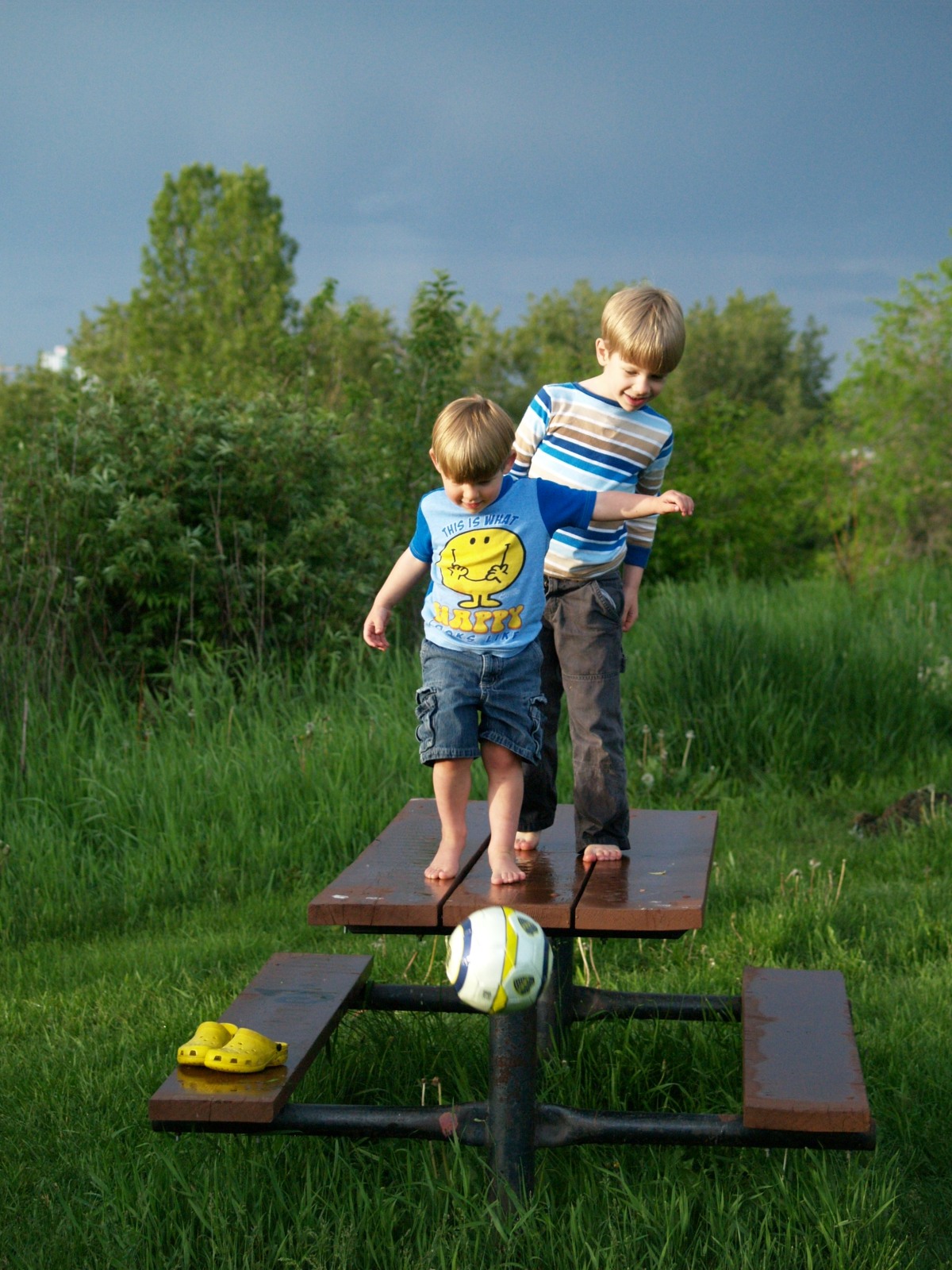 2 thoughts on “Blinded by the Light: Chasing Rainbows”