In honor of our oldest’s sixth birthday last month, we took him and five similarly aged friends bowling. Which, in my mind, seemed like the easiest birthday party ever.

I didn’t really think about the fact that (a) bowling alleys are very loud places, (b) loud places hamper communication, (c) all the boys were under six, (d) the six and under set aren’t exactly known for their wisdom and patience.

Which is how I got to spend an hour trying to get six overeager boys to bowl when it was their turn. While trying to keep their curious fingers away from the track upon which the bowling balls ‘float’ back to the start. (Three ended up with pinched fingers.) In a place so loud I don’t think they could have heard me had I been yelling at them through a loudspeaker.

I basically felt like a poodle trying to herd a half dozen bears.

Two hours later, the Gort pronounced his party a success and played contentedly with all the lovely gifts he’d received. And, today, nearly a month later, we finally got around to making thank you notes. I just couldn’t bear to send him back to school without cards for the friends who’d brought him such fun gifts.

So I pulled out my sewing machine and sewed some red felt animal shapes onto white cardstock. I passed the folded cards over to my helper and charged him with writing the recipients’ names on their respective cards.

I’m really not trying to ‘wish away’ this phase of life, where my beloved boy asks me every two seconds how a certain word is spelled, but I do look forward to the day when he can read and write.

Until then, a large chunk of my day is (and will be) devoted to one of the following scenarios.

When there are no slogans providing visual cues, he resorts to the other scenario: asking me how to spell something. ‘How do you spell Samuel?’ he asks while I’m in the middle of cutting out red felt cow legs. Or gluing felt onto card stock. ‘S-a-m-u-e-l’, I reply while trying to focus on the task at hand and trying to keep track of where I am in the letter sequence. Lest I lead him astray in his spelling and inadvertently cause him to correct a classmate (in an Adam Sandler-Water-Boy-esque voice) ‘but my mama says Samuel is spelled S-a-m-e-l.’

Somehow we managed to get the names on the five cards. And it only took about thirty minutes. And the only mistake he made was spelling Samuel with an n. Which was easily remedied.

‘I’m done!’ he announced triumphantly; prepared to abandon his seat at the table. I looked at him. Perplexed. How could he think he was done?

‘Well you still need to say thank you…. inside the card.’

Who’d ever heard of a thank you card that didn’t say thank you?

I looked at the friend’s name on the first card. ‘He gave you Lego, so you need to say thanks for the Lego.’

He opened the card and held it to his mouth.

‘Thanks for the Lego’ he spoke. And closed the card. 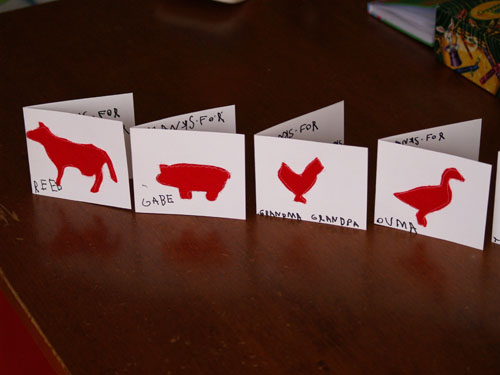 9 thoughts on “The power of the spoken word”