Yes this is the official Johnson family Easter Day photo.

Weird how these things happen roughly around the same time each year. And yet, carefully thought out holiday rituals are not my forte. I’m lucky if my brain thinks of something twenty four hours before it’s due to transpire.

My mom (aka the American Easter bunny) sent the boys a box filled with candy. After reviewing the contents and consuming a good portion thereof, I was relieved to discover that there was a plethora of sugary treats and I (aka the Canadian Easter bunny) would not have to go back to the grocery store for the tenth time in as many days.

I dug around in the basement for the plastic eggs I KNEW I’d saved from last year. I found the crumpled bag stuffed in the corner of a closet. It contained a measly fourteen eggs. If the label on the package is to be believed, there were once 48 plastic eggs in the bag. Not sure what happened to the other 34 during the course of the year.

So I ‘slyly’ wrote the boys a note (when they weren’t looking), announcing the imminent hunt for the candied treasure. The Canadian Easter bunny decided to be clever and signed the notes ‘Conejo’ which means rabbit in Spanish. I think. One of the Gort’s recently acquired vocabulary words.

After ‘reading’ the note with his dad’s help, the Gort ran to the front door and waited expectantly for the arrival of the fictitious rabbit. 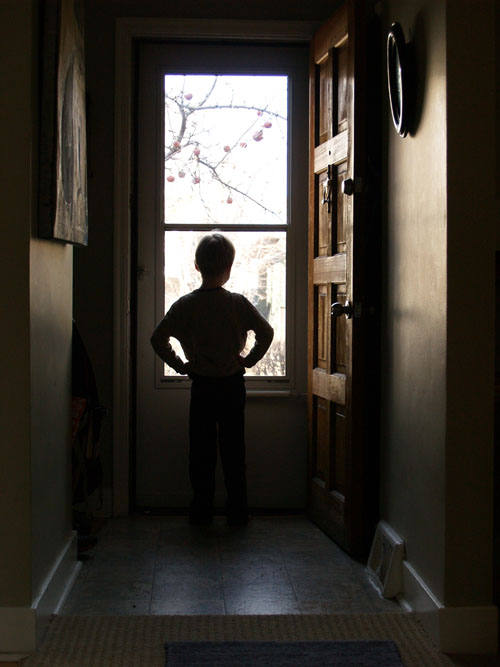 Finally after many, many minutes, (enough time for the Easter bunny to sneak outside and hide all the candy) another secret note appeared. This one contained an inventory of treasure to be found. And a hastily drawn map, courtesy of the professor. And good-citizen admonishments like ‘have fun, be kind, share’. 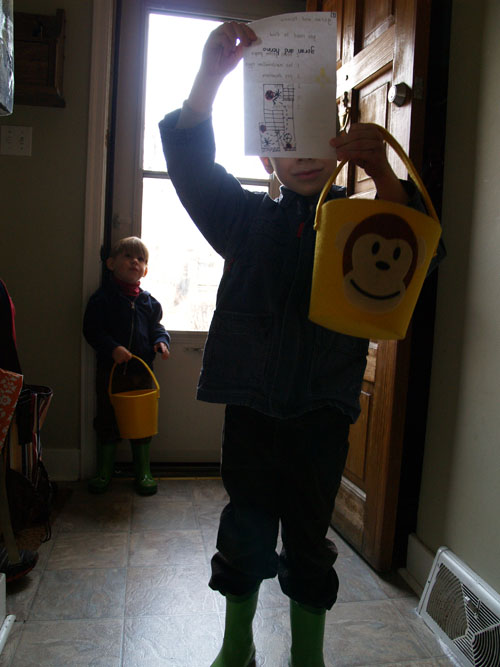 I’d wanted to take the boys to a park for the hunt. But the professor nixed that idea when I unveiled my grand plan early Saturday morning. Which is just as well, I suppose, since the hunt lasted a whopping 3 minutes. Because the conscientious bunny had hidden several items together. To avoid one kid finding a box of Peeps and the other wailing because they didn’t have a box of Peeps. Conejos hate conflict. It’s a known fact.

It was the first Easter for the babe of the house. Other than being annoyed that we moved him from the warm house to the windy outside, he didn’t seem to care. The poor kid ended up with a semi-girly-looking red felt sunflower basket. Because there were only two yellow monkey baskets at Michaels on the Wednesday before Easter when I realized the boys didn’t have any baskets. I contemplated removing the sunflower and affixing a homemade monkey face made of felt. But even as I ‘thought’ it, I knew it wasn’t going to happen. At least not this year.

And what are the odds that all three baskets will survive until next Easter?

We came inside the house and the boys started shoveling Pez and jelly beans in their mouths. I realized I’d forgotten to put the ‘satin-ribbon-grass’ in the buckets.

4 thoughts on “The Easter Conejo”