The baby of the house hit the six month mark on Saturday. Which means on Sunday he was closer to being one year old than he was to being a newborn. I’m thinking about tying his legs and arms together so he can’t learn any new tricks and will stay this way for just a few more months.

Along with turning half a year old, comes the distinct privilege of eating a disgusting white substance known as rice cereal.

The Gort started eating rice cereal when he was a whopping 3 months old. Mostly because the Brits had suggested starting cereal at 4 months, so we figured what’s a few weeks earlier? The boys’ Canadian doctor looked AGHAST when I told him this. He’s a first-time dad who told me in a panicky voice that his wife had fed their baby son berries well before the little man was even nine months old.

I was a little more conservative with the Hen. He had his first bite of cereal at five months. I’d never seen a kid so ready for food. He was practically drooling at the table when we’d put food in our mouths; making futile attempts at grabbing our forks. It was as if he knew exactly what to do.

This time around, it being our final round of rice cereal, I was bound and determined to wait until the kid was six months old. Exactly. Down to the minute he was born, practically.

And Saturday was the day.

I mixed up the ‘slurry’ of deliciousness. And stood by with the camera. It was a semi-disaster, really. He had no idea what to do with a foreign object in his mouth. Especially one containing a liquidy substance. And, being six months old, he insisted on grabbing the spoon each time it came toward his mouth.

I doubt he ingested more than a teaspoon full when all was said and done.

He’ll be walking around saying ‘I want to watch a movie’ in no time at all. Sigh. 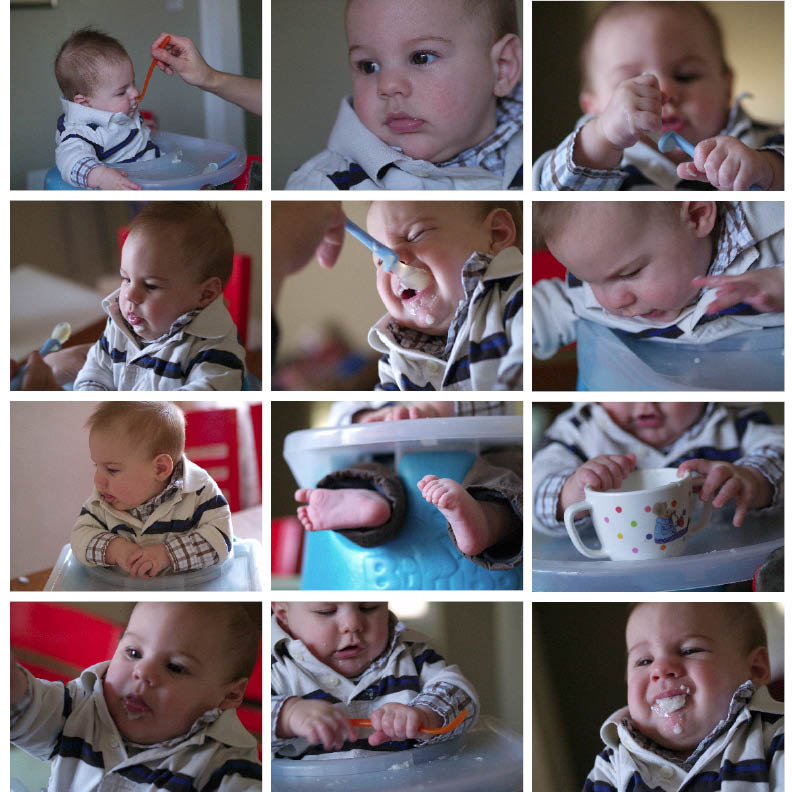 2 thoughts on “Two adults, two spoons and a bowl”