Some time in January we received word that the Kindergarten students at the Gort’s school would be having an assembly in February. There was no information on what kind of assembly it would be. I could only assume a February gathering was the school’s way of circumventing the political-correctness nightmare that is the  December/holiday/Christmas/winter/solstice program.

A couple of weeks before the assembly we received another note: students participating in the assembly should wear black pants and white shirts.

Which annoyed me, frankly. Couldn’t they have said ‘dark pants’ and ‘light shirts’ or something equally vague? Did it really have to be black pants and a white shirt for a one-time-only Kindergarten assembly? I mean, if he had to wear black pants, would he also have to wear black shoes?

Maybe we are an unusual family, but our almost six year old does not own a pair of black pants, black shoes or white shirt. He does have dark brown corduroy pants. And a cream long-sleeved t-shirt. And brown shoes. Which, in my mind, should suffice for an occasion of such limited importance. But still, I felt torn. Should I buy the kid a pair of black pants, just for the assembly? When he already has ten pairs of pants?

Or do I ‘buck convention’ and send him to school with his dark brown cords and cream shirt?

A few days after the dress-code note, I happened to be at the Superstore, so I poked around in the boys’ clothes area. There were no white shirts of any kind. (Cream shirt it would have to be.) Though there were some black corduroy pants. On sale.

But as these things go, there was a slight problem. The only sizes available were 4 or 10. One slightly too short. And the other entirely too long. Which resulted in another dilemma: do I knowingly buy my son slightly short pants because they’re cheap? Or do I keep looking?

I went with the cheap option.

In an effort to compensate for my shamelessness, I bought him some black shoes. (Also on sale.) They were on the high-top side of the shoe spectrum, so I figured the added height on the shoe, would minimize any gap between his ankles and the hem of the pants.

Wardrobe dilemma solved. Which meant the countdown to the assembly could begin.

The Gort, bless his heart, likes to add letters to sounds and turn them into new sounds. The name Josh-ua becomes Josh-ree-a. The name Oneida becomes Ore-na-da. And the word assembly becomes…..dissembly.

He poked his blond head into our bedroom this morning. ‘Guys, today’s my dissembly!’ he announced, brimming with pride and excitement. And, though it’s probably my job to tell him ‘kid, the word is ASS-embly not DISS-embly’ I didn’t really want to. I like dissembly. A lot.

We four audience members arrived at the school a few minutes after the appointed 1:30 start time. Which means we missed the first song. Our little man’s face lit up when he saw us (finally!) walk into the gym and assume our standing-room-only spots at the back. Behind the mommarazzi.

He gave us a little wave and continued singing and doing the requisite motions, stopping every few minutes to sweep his bangs towards his ears. Using both hands.

As I watched my (from-very-far-away) video footage later in the evening, I nearly died laughing at this kid who kept stopping whatever he was doing to move his hair off his forehead.

The assembly featured maracas and drums and un-synchronized movements. And songs in Spanish, French and English. It was beyond adorable.

After three or four songs and some brief remarks from the principal, the dissembly was over. Parents were invited to take (slightly closer up) pictures of the superstars. While said superstars stood and flipped their hair in all directions and made funny faces.

Kindergarteners are an interesting breed.

After pictures we collected our boy and walked back to the car. ‘I saw you wave at me,’ the professor excitedly confided to his oldest. ‘No, I was waving at mom,’ the Gort corrected his dad, ‘and Henners and the baby. I guess I forgot to wave at you,’ he shrugged semi-apologetically.

Apparently it’s possible to wave at only three people in a four-person party. Who knew!

When we got out of the car in front of the house, the little man half-turned towards me. ‘You know mom, my shirt wasn’t really white.’

As if to say, I’m on to you and your cheap tricks. 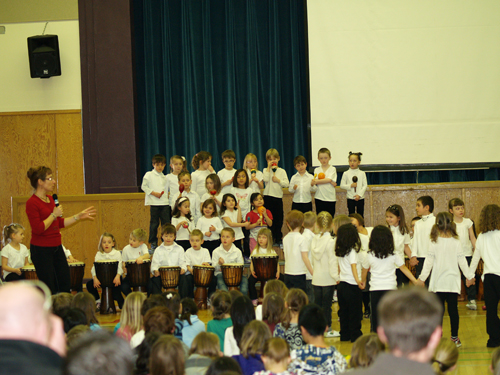 2 thoughts on “The Dissembly”