I don’t know if it’s a result of being the second-born child, or just his personality, or both; whatever it is our Hen is a character. And a half.

He is fierce and loud; a two year old desperately trying to act like a five year old. He laughs hard and cries even harder. Whereas the Gort used to be the primary inflictor of brotherly pain; the Hen is holding his own these days. And then some. I walked into a room the other day and saw the Hen chasing another boy – a rather tall boy nearly four years older than he – around the room. ‘He keeps trying to hit me!’ the older boy yelled. In a panicky voice.

Not that I condone bullying from any source, but it was a little bit funny: this two year old kid chasing an almost six year old in circles around the room.

But for all his loudness and funnyness, our second oldest also has a bit of a softer side. Especially where his brothers are concerned.

It was another early morning at the Johnson’s, last week.The baby didn’t sleep well and the Hen was wide awake and in our bed before 7am.

‘Bee-bee’ he squealed excitedly at the sight of our littlest man. Loudly, especially given the hour. ‘Bee-bee, bee-bee, bee-bee’ he repeated while patting the poor little guy on the chest. They’re more like chest compressions, but I think he means well.

‘You wan blankie?’ he asked the baby as he carefully draped his white pillowcase (‘ba’) over the little guy. He noticed the baby’s mouth didn’t contain a pacifier, and started looking around. In the dark. ‘Whe baby’s da?’ he asked, hoping the adults would produce the ‘dummy’. He didn’t offer up his own.

With the concern portion of the show out of the way, he moved on to entertainment.

Indeed, especially at 7am. I laughed, which provided the necessary impetus for him to keep going. ‘Rrrrrrah….I scare baby!’ He yelled, followed by ‘Rrrrrah, I scare daddy!’ And mommy. Even Gaga – his oldest brother, fast asleep in his bed – was included.

Even at the tender age of two and a bit, the kid has a definite understanding of how the world works. He’s figured out that if he cries, and professes injury, people extend concern to him. And often punish his oldest sibling.

It’s a strategy he’s trying on with the baby too. He’ll put his hand underneath the baby’s, so the tiny baby hand is resting on his. Then he yells ‘Oww!’ as loud as he can. Whilst pulling his hand away dramatically and looking at it pathetically.

Thus far his theatrics haven’t resulted in any ‘punishment’ for the little lad.

The professor walked in the house the other night. He’d been outside loading our van for yet another North American roadtrip. ‘Did you know your son was outside?’ he asked as he carried in our middle boy. He’d been found trying to descend the deck steps, while wearing my black Dansko clogs. Clogs as big as his torso. No wonder he was having trouble.

The same adventurous kid had been found underneath the dining table earlier in the day. With his hand firmly entrenched in a ziploc bag – full of rum balls. 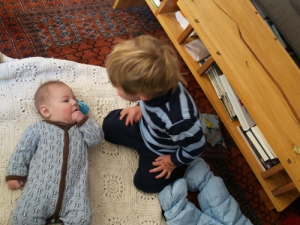 One thought on “The Mother Hen”