If you’ve been around kids for any amount of time, you know that if they wake up too early…they’re often grumpy; collapsing into piles of tired tears for no apparent reason. But I had no idea that the same is true when kids wake up later than usual. I’m sure Mrs. Duggar is aware of this phenomenon. You learn a thing or two when you have eighteen or nineteen kids.

Anyway. For whatever reason, both boys slept in until almost 8 today. Stupidly, I walked through the house around 7.30am, certain that this meant my day was going to be awesome. To celebrate the extra hour of sleep I got, I indulged the boys in making ‘mud’ muffins after breakfast. Another fabulous recipe brought to you by the same people who created ‘peanut butter munches’.

Maybe I’m in the minority on this…but I actually don’t like my muffins to taste like cake. Muffins should be breakfasty with bananas or raisins in them; not chocolate chips. Mud muffins have chocolate chips in them. And cocoa powder. They’re essentially cupcakes without any frosting. What’s the point – the frosting is the best part.

So, being extraordinary-fun-slightly-more-well-rested mom, we made the mud muffins. And we ate them. And, when the Hen grabbed a bag of old coffee beans and dumped them on the floor, I didn’t protest. Because today was going to be such a good day. And I’d had an extra hour of sleep. 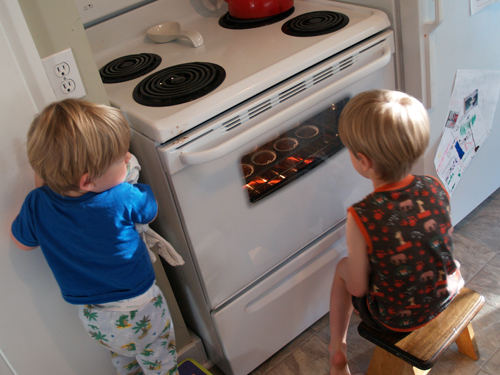 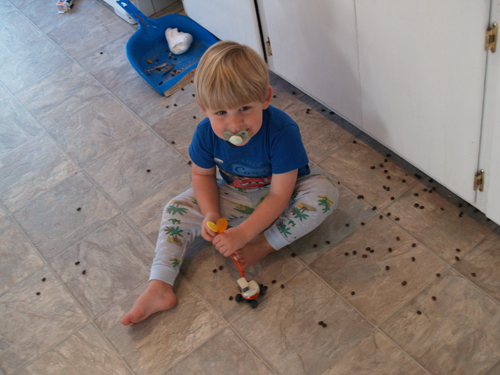 Yes, I was the mother who, today, informed her son: ‘you’ve used up your allotted tears today. You are not allowed to cry anymore.’

The same mother who, when asked by someone how family life was going, responded: ‘I’m pretty sure I broke my teeth today, from yelling at my kids.’ Perplexed, the inquirer inquired further, since the statement made no sense to anyone but me… ‘from the force of the words?’ ‘No…because of how hard I clenched my teeth while I was yelling at them,’ I clarified. Obviously.

It was the kind of day where every single person I came across said the same five words to me: ‘you’re a busy lady!’

Was it the look on my face, or my unkempt appearance; or that a newborn was dangling from one arm while my other arm was clutching a two year old’s hand as I was making my way to the kindergarten pick up line?

I’m really looking forward to that dreaded day at school when the Gort is asked to say or write something about his mother. I can hear it now: ‘my mom likes to tell me to stay away from the baby, and that I shouldn’t cry. And she makes me pick up toys.’

And the teacher will shudder on the inside at the poor child’s misfortune, while trying to think of something nice to say.

I’m sure tomorrow will be better – I ate all the mud muffins and threw away the coffee beans.

8 thoughts on “A Muddy Day”