Some people spend their Saturday nights going out on the town, watching movies, eating at restaurants. Yawn. Apparently, I’d rather save the calories and money, and find a mini-tutorial on using Photoshop; and waste fifteen minutes coloring my son’s irises, and pupils. And his lips and….his tongue.

The professor wasn’t the least bit offended that I’d rather get my learnin’ from a random stranger’s blog than from him. What can I say, I’d just rather read instructions than have someone do the work for me? Actually, that’s not true. At all. But as we all know, working with another person (or watching another person work) on the same computer can drive you batty. 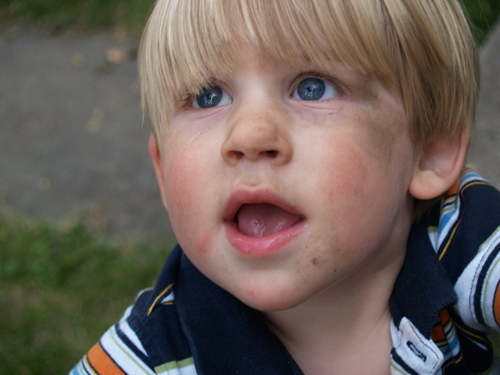 Technicolor Hen, who may have played in his mom’s makeup bag. (If she had a makeup bag….) 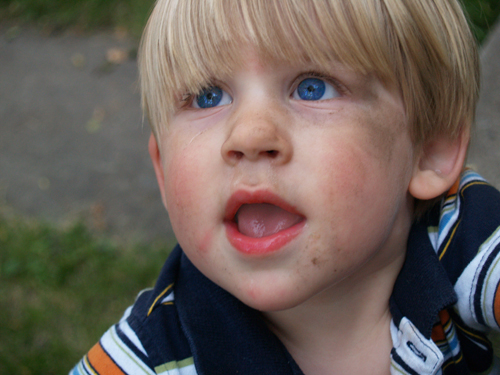 ‘Those lips are a little pink’ the professor declared when I presented my finished work for his review. But I think he was just miffed that I’d figured out how to do it myself. I guess I use the term ‘figure out’ loosely since I didn’t bother correcting my ‘artistic license’.

‘Which one do you like better,’ I asked my oldest who informed me earlier that he was angry at me for ‘taking away [his] light.’ (As in, daylight.)

‘I like this one, and this one,’ he answered. Ever the diplomat.

Clearly I don’t have a future as a photo editor. Though it would be nice if I could have evened out his bangs a bit…..

For now, I’ll stick to making popsicles. And regular cookies.