I don’t pretend to really know my children all that well. I mean, there’s just no telling what goes on in their little heads most days. Why does the Hen like to walk backwards? (A two-step shuffle might be a more accurate description.) Why does the Gort love tuna fish, pickles, cheese and crackers more than anything else in this world, and ask to eat it. Every single day? Why did the Hen eat a pound of canteloupe one day and spit it out of his mouth like it was fish eggs on another?

Why does the Gort insist he’s not tired, only to fall asleep on the dining room chair? 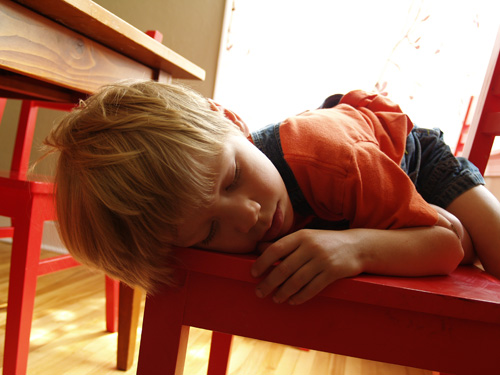 In addition to being bizarre and irrational, the kids are also just plain funny.

We attempted two outings this weekend. The first, because we’d spent the better part of a day lolling about the house and I feared we were going to turn into sloths imminently. So Jason looked online and found a $5 movie theater showing second-run movies. Like Monsters v. Aliens. En route we stopped at the grocery store and picked up a few picnic items which we promptly ate in the car-van. Followed by a brief stroll in the rain at a nearby park. Followed by the movie.

I guess it’s been a while since our boys went to the movie theater. In fact, I’m hard-pressed to recall when we last set foot in one. So I guess it’s understandable that G greeted the news of our outing with more enthusiasm than if he’d won the lottery. He barged through the adults standing in line to buy tickets (we already had ours). ‘Someone’s a little excited,’ an older woman remarked. And raced ahead to the theater. I was momentarily sidetracked at the vending machine, trying to decide if I wanted to spend $3 on a bottle of water.

When I caught up with my posse, they were sitting patiently in the dark. Anxiously awaiting the start of…..Wolverine? Wrong theater, guys! Luckily the Monsters v Aliens show was directly adjacent, otherwise someone might have had a bit of a conniption. The movie finally started and I think Jason and I spent the majority of the show just watching the boys’ faces. The Hen sat on his Daddy’s lap, alternately sucking on jelly candies and yelling at the screen. The Gort sat in between us, like the big kid that he is, in awe, asking questions, giggling. A spectrum of emotions on display.

Periodically Jason and I would exchange smiles and shake our heads in wonder at the cherubs in our midst. Until the Hen decided he’d had enough, and started climbing all over the place. His weight still isn’t sufficient to ensure the seat stays down, so he found himself sandwiched in the movie chair more than once.

When we got home, they jumped in the bath. As a joke I asked Mr. G if he’d wash his brother’s hair. Little did I know he’d take me up on the suggestion. Jason and I stood in the doorway and laughed until we cried, watching big brother imitate his parents’ actions and words; taking a yellow cup and dumping water over his startled brother’s head while repeating the (useless) soothing words we normally utter. He even got out the shampoo, squirted some on his hand and transferred it to the Hen’s head. Judging from the vibrant Johnson & Johnson smell still present, I’m guessing it didn’t all get rinsed out.

Surprisingly, the Hen objected a lot less than when we wash his hair.

Sunday brought adventure number two. In an attempt to stave off another afternoon of laying about the house, accomplishing nothing, we went to the Glenmore Reservoir. I thought we could walk along the trails for a bit and hit the playground afterwards. Fun for everyone; sure to tire out the little people – a double bonus, really.

Except when we got there G wanted to go off the beaten track. He didn’t want to walk along the paved trails where bikers, rollerbladers and walkers normally go. Instead, he wanted to go along a 6 inch wide dirt path leading directly down to the water. At a fairly steep angle.

So being the adventurers that we are, we went. A 34-week pregnant woman wearing a black skirt, tank top and flip flops. A man pushing a jogging stroller containing a toddler and an orange t-shirt clad young lad wearing brown crocs. It was steep; not the kind of walk anyone (much less those-with-child) should do in flip-flops. And I just hoped I wouldn’t see any snakes among the thigh-high grass lining the narrow pathway.

We got down to the water, only to be disappointed. There was no waterfront or rocky beach. It was just marshy grass leading into water. We decided to turn around. Except Mr. G ignored our memo and continued on. Until he fell on his bum in the water. Immersed to his belly button.

Now normally this would have brought on tremendous tears. Flailing arms. Demands for dry clothes (which we did not bring). But today, for some reason, it elicited laughter. Coupled with ‘that’s okay, I’m sure it will dry off.’

And so we began our ascent back to the top. My flip flops, now wet, weren’t going to cut it. So, barefoot I went, huffing and puffing something fierce. Pushing onward to the playground, where the boys settled into the sand pit with the trucks they’d brought along. Since it was the last day of Stampede, I’d assumed the playground would be deserted. But there was an enormous gathering – family reunion, perhaps – of families of Middle Eastern descent.

I felt a little immodest in my tank top amidst the hijabs, long pants and long skirts. Especially when our oldest removed his shirt (soaking wet, after all) displaying his milky white chest for all to see. Minutes later, our normally shy 5 year old (with his shirt back on), ran over to the merry-go-round, and inserted himself onto the apparatus crowded to the gills with friends and relatives, clamoring at the chance to run alongside and spin the nearly twenty people upon it.

The Hen stayed in the pit, sharing trucks and sand with some newfound friends, while trying to catch the attention of some young girls. We just smiled and shook our heads at the blondies.