Mention you live in Calgary and the number one response will be: ‘Oh, Stampede?! Have you been to Stampede?’ There is a couple in our Muncie church who regularly makes the pilgrimage to Stampede. Apparently it’s that….good.

From what I can gather – hearsay, the odd advertisement – ‘Stampede‘ or ‘The Greatest Outdoor Show on Earth’ occurs in the first part of July, shortly after Canada Day, and lasts for about ten days. It’s essentially a state fair with rodeos and musical entertainment all rolled into one; with half the populace wearing ‘western gear’ of some sort. And businesses and organizations everywhere hosting a ‘Stampede Breakfast’ each day of the festivities.

Jason’s department got in on the action, too. On Tuesday morning, they hosted a Stampede Breakfast (think pancakes and sausage served outdoors with an indie band playing vigorously), which we dutifully attended. The secretaries had created ‘Wanted’ posters with each faculty member’s visage emblazoned upon it. Naturally, I asked Jason to bring me his as a keepsake. ‘Put it with your Jon Gosselin autograph,’ he suggested.

At the preschool, the teacher had handed out little cards with information about ‘Kid’s Day’ at Stampede. There would be free admission, a free breakfast, and free cowboy hats. All for those who arrived before 9am. It seemed the least (financially) risky way to experience this particular aspect of Calgary culture. Still, we dithered about going. Right up to 11pm on Tuesday. I was leaning towards ‘not’ going. Jason, who previously adamantly refused to even contemplate the matter, was leaning towards ‘going’.

Yin and Yang. That’s who we are.

So, at 6.20am on Wednesday, when the Hen woke up, I decided it must be a sign that we should go. And proceeded to get ready, in an effort to get there by 8. So as to avail ourselves to all the freebies. Instead we left the house at 8. And drove to the University of Calgary, not the Stampede. Jason thought we should take the C-train (light rail) in, instead of trying to park our car in the mayhem. A wise idea, except it was quite a walk from his chosen parking garage to the train station.

There he was, pushing a speedy jogging stroller with a small person inside it, while I, at almost 34 weeks pregnant and holding hands with a five year old, lagged behind. ‘Hustle it up’ he called over his shoulder. I bit my lip in an effort to contain the choice words I wanted to toss back at him. Apparently I’m the only pregnant-woman-with-6-weeks to go who can’t speed-walk.

Naturally the ticket machines at this particular station only took exact change, which means we hopped on the train illegally; sans billets. I envisioned us getting hauled off the train by ticket agents, or being fined hundreds of dollars.

We arrived at the Stampede gate at 9am. Just in time to get free admission, but little else. We never found the breakfast – presumably it was gone by that point – and the ‘cowboy hats’, why they were blue paper cardboard hats with the sponsor’s logo. Judging from what the masses were carrying around.

Without an itinerary or clear idea of what we wanted to do, we wandered around aimlessly. Bought some overpriced food. Checked out some stinky farm animals. And then came the rides.

Mr. G had seen the cars from the ‘Skyride’ floating high above his head. He’d pointed to them and expressed an interest in getting on. So we, being good parents who want their kids to have fun, bought ride coupons and stood in line. Now, I’m not a fan of heights. At all. And I actually don’t like amusement park rides, at all.

As we waited in line Jason asked: ‘who wants to go with me, and who wants to go with mommy?’ Since we weren’t all going to fit in the same car. Mr. G clamored to go with his dad, which was great, except I’d already (mentally) decided that I would rather not take the little one in my car. Something about not wanting to be trapped at great heights with a screaming child who won’t sit down?

Suddenly it was our turn to get on; there was no going back. ‘How long is this ride,’ I asked the attendant in a panicky-trying-to-be-calm voice. ‘Oh, about ten minutes,’ she replied. That’s a long time, I thought. Jason and our oldest got on the first car. The Hen and I jumped onto the second one. It was going swimmingly, until my feet stopped touching the ground. And the Hen refused to sit down and started screaming. All my worst fears realized within the first ten seconds of the ride. And we still had nine minutes and fifty seconds to go?

Luckily he stopped screaming, opting to stand on my lap and look behind us instead. While I clutched him in an iron grip, trying to eradicate ‘child overboard’ images from my mind. All while trying to look neither up nor down. I had a flashback to the 7th grade when my sister and I had gotten on the ferris wheel at the Monongahela County Fair in West Virginia. How does it look so benign when you’re standing on the ground gazing up at it? Naturally the cars came to a halt – right as we were approaching the top.

Since neither of us had been on the ride before, we didn’t know it stopped periodically – to let other passengers on – or whatever. Both of us feared we’d gotten stuck. And we each freaked out. Me in my silent ‘if I don’t say anything, maybe it will be okay’ way. She in her not-so-silent ‘we’re going to die’ way.

Fast forward twenty some years later, and I’m suspended in mid-air, clutching my blue eyed cherub as though our collective lives depend upon it. Still silent; scared that if I actually voice my fears they will be realized. My plans for taking great pictures, evaporated. There was no way I was letting go of the Hen for even a millisecond to take a picture. So, with my camera strapped around my neck, I clumsily held it in my left hand, while trying to push the button with my thumb. Just like Annie Leibovitz. 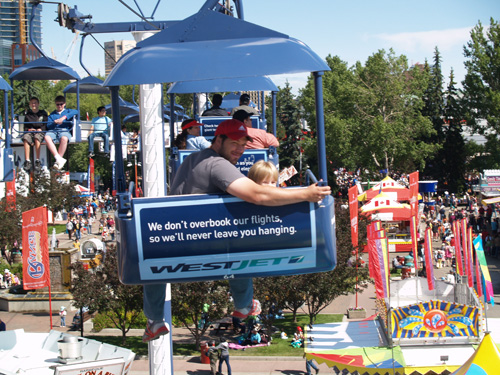 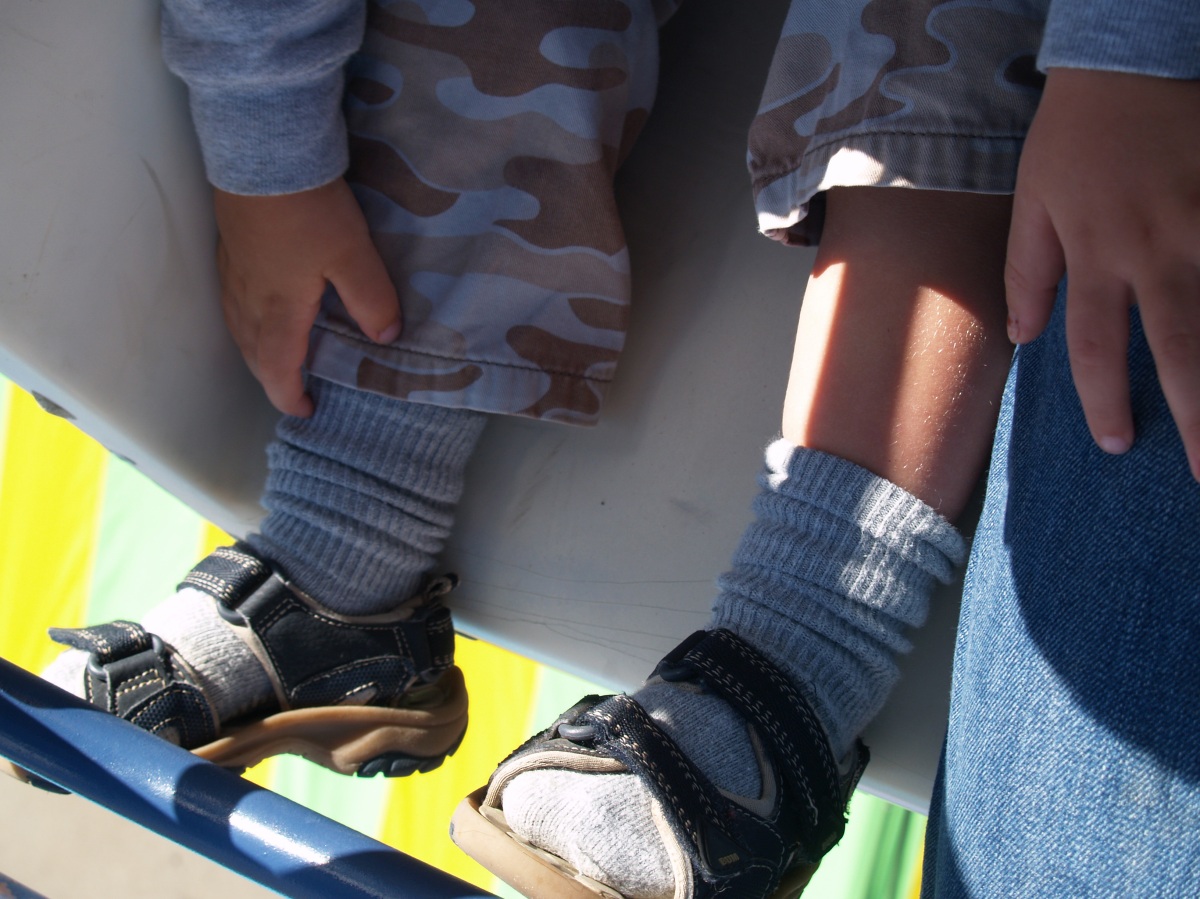 As we approached the end, with our feet nearly touching the earth again, I relinquished my grip on the Hen and removed the camera from around my neck, in an effort to take a few decent shots. At the designated moment, we hopped out of the car. Except I’d forgotten the camera was just sitting in my lap.

Crash, was the sound it made when it hit the concrete surface. And as I stooped down to grab it, I got hit from behind by the moving car and yelled at by the ride attendant. Price saved on admission, $24. Probable camera repair, $400. Total experience, priceless.

‘Were you really scared,’ Jason asked me later, ‘because I was,’ he confessed without waiting for my reply. ‘I was holding onto our boy with all my might. He even said ‘Daddy stop holding me so tight’ but I couldn’t stop. Same thing when we went on the water ride. I was gripping him from behind with my arm, freaking out, while he was….laughing…having a great old time.’

14 thoughts on “The greatest show on earth”