There are mothers who insist on getting out of the house as often as possible for fear they will go crazy from being confined with their offspring.

But the mere thought of actually taking my offspring anywhere…wears me out. Clearly, I’m no Mrs. Duggar if I’m too wimpy to take 2 small boys out in public by myself. But, typically, when I take them to, say, the grocery store, the five year old gets out of the cart to help ‘push’ it or to crawl underneath it like a stowaway. (Gross.) When the one and a half year old catches on that his brother is ‘free’, he wants to get out too. Except he doesn’t push the cart – he runs away from it. And with his toddler tunnel vision, it means he runs directly into the path of oncoming carts and I have to constantly abandon my own cart to stop/retrieve him. While ignoring the dirty looks thrown my way from other customers who are just trying to navigate a grocery store aisle without near-collisions with a pint-sized member of the human race. Understandable.

But on Thursday, Jason left at 7.30am and wouldn’t return until 11pm. Which means not only was it a long day, but if I didn’t go to the store to pick up a loaf of bread or cheese, we would go hungry. Also, I needed to kill some time.

So I sucked up my laziness/apprehension/dread and drove to the store. I loaded the boys in a cart with a couple of Thomas books from the library, and we were off – to navigate the insanity that is the Superstore. It may be the grocery store equivalent of Wal-Mart. The place is never not crowded. Weekday, weekend, morning, afternoon or evening – it’s filled with people. And the checkout lines….

As we moved up and down aisles, looking for strange ingredients for a salmon salad I hoped to make, Mr. G started asking for things. Can we buy some popcorn? Well, I never buy popcorn, so I figured what’s the harm. Sure. Maybe we can make popcorn and watch a movie when we get home, I suggested. Well, popcorn led to apple juice (rarely on the list), which led to cookies (ditto), which led to Goldfish crackers (ditto).

Why am I letting you have all these things, I wondered aloud? He just grinned. I attributed my indulgence to the fact that there hadn’t been any whining or tantrums. Then again, I was buying everything he wanted – there was nothing to complain about.

Let’s have a party when we get home, in the kitchen, he suggested. Great idea, I responded enthusiastically. While secretly wondering if Goldfish crackers and popcorn and cookies and juice could do double duty…as a party and dinner.

There’s something particularly endearing about the level of excitement kids have for the little things. A party in a kitchen?! But he was psyched about it. He talked about putting pillows and blankets in the kitchen. He unloaded the entire cart of groceries at the check-out, and loaded them all back into the cart. He carried all the ‘party snacks’ into the house. Retrieved 3 bowls and cups for our feast. Opened the juice by himself and poured some for all of us.

And, as with all things anticipated with great excitement, it was over rather quickly. I mean, how long can you sit on a kitchen floor and eat goldfish crackers. Or popcorn. Or a box of cookies.

But it was fun while it lasted. 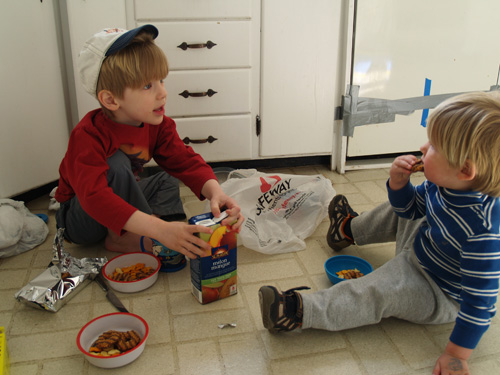 If someone could tell Gilligan that his hat is too small for his head, that would be great.

2 thoughts on “Let’s get this party started”