‘I guess you’ll be cursing a lot again,’ Jason remarked on his way out of the house for a walk, after I told him of my plans to cut the boys’ hair. I gave him a not-so-nice look. ‘I mean, it’s not like you actually curse,’ he back-tracked…’it’s just the look on your face…I can tell you want to curse.’ 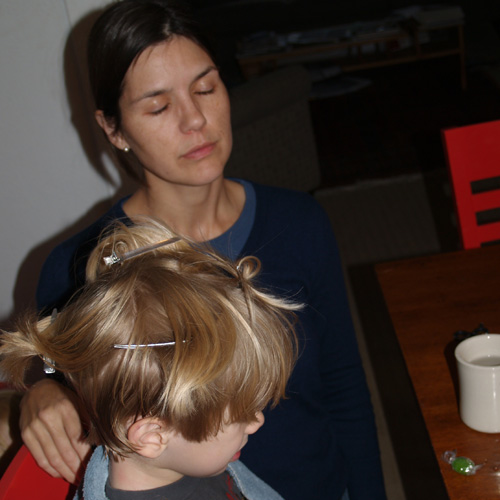 Cutting my kids’ hair is one of my least favorite things to do and tries my patience more than most activities.

I’m not sure what’s worst about it: my lack of skill; their inability to keep their head still; the way they swat away the scissors with their hands; my unfailing ability to cut the middle finger on my left hand at least twice; or their habit of crying throughout the experience.

It’s beyond stressful – a thankless job. And then I have to hear my better half’s comments when all is said and done. ‘It looks like Playmobil hair’ or ‘he looks like He-man’, or, my personal favorite: ‘what happened in the back?’

You try cutting their hair, I like to say. He has, and his results were no better. In fact, the horizontal ‘layers’ he gave the Hen (He-man) are only now starting to grow out.

So it was with low expectations that I set about my task on Saturday afternoon. Having bribed him with a movie and some m&m’s, I began cutting Mr. G’s hair while his younger brother napped. His eyes began to droop before I’d finished cutting his bangs. I’d forgotten that he’d stayed up way too late the night before. His head swayed abruptly from left to right, as he battled the sleepiness that was quickly overcoming him.

I thought about being a kind, considerate mother; abandoning my task to let the poor guy rest in peace. But then I realized I had a captive audience. One who wouldn’t cry or ask ‘how many more cuts’ until I was done or fail to keep his head still when I had a pair of super sharp scissors at the nape of his neck. 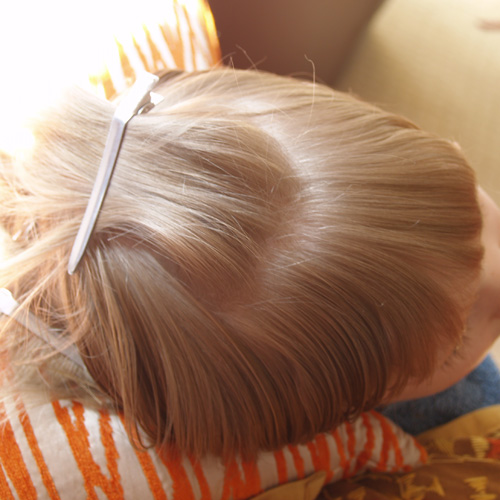 So, I put some pillows under his neck – to make him more comfortable and in an effort to keep his head stationary. And, cut to my heart’s content. It was a thing of beauty. Though I had to concede defeat when I made my way to the back of his head. I would have to wait until he woke up from his nap.

By that time I’d finished cutting his little brother’s hair. Who was rather relaxed about being in the barber’s chair this time around. Admittedly I had to part with a lot more m&m’s than I wanted to. But a little sugar/food coloring rush is a small price to pay for a peaceful hair trimming experience.

When all was washed and combed, they looked okay. Pretty good, even.

At least I haven’t heard any snarky ‘by the power of Grayskull’ comments.

9 thoughts on “To trim or not to trim”