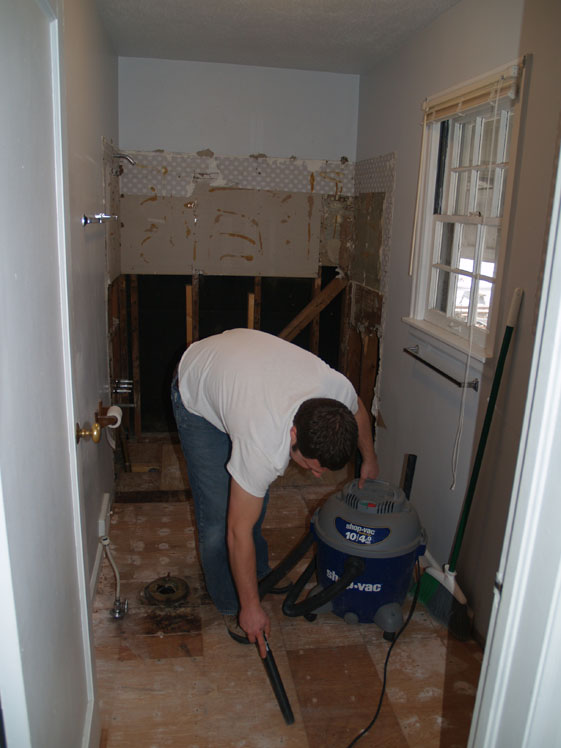 It’s time for the second annual round of ‘Johnson Family Work Days’: when all available family members gather at a particular home and do whatever work needs to be done.  I’ve noticed that other family members tend to choose tasks that can actually be completed in a day.  But J and I seem to be eternal optimists/hopelessly naive when it comes to choosing jobs that are do-able in a 6 hour time-frame.

For example, last January the men gutted our bedroom closet and merged it with a previously unused half bathroom.  The result:  by JUNE we had a functioning three-quarter bathroom.

This year we decided to gut the other bathroom – fully expecting (??) it would be functional at the end of the day.  Which is almost what happened..

The tub and surround, toilet and sink were removed, as was the floor, and the mirror.  And, when J’s two brothers left at the end of the day, there was a plywood subfloor, a white (un-connected) tub in the bathroom, a hole where the toilet used to be, and a hole in the wall where the mirror and excessive fluorescent lights used to be.  Pretty –  in a minimalist sort of way.

A friend of mine insists she is impressed that we tackle projects like this despite having little people in the house.  But, really, I think it might have been easier to live with the grey tub and toilet, the weird white and blue diamond tiles and the world’s ugliest sink/cabinet/mirror/light combination, a little while longer.